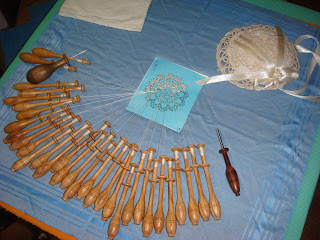 At the beginning of December I had a lace lesson, I knew I did, but when I had driven all the way over to the teacher's house, (1hr's drive) she said I was mistaken, and that I was supposed to ring her to say whether it was this day or the following week. I knew that I wouldn't have said that, because I have fixed off-duty, but I didn't really say what I felt, I just drove away, feeling all upset. When I got home I ripped off the lace angel we had been working on, I hate sodding angels anyway, I never chose to make an angel, and also removed the heart that I finished tant bien que mal, and started this motif. 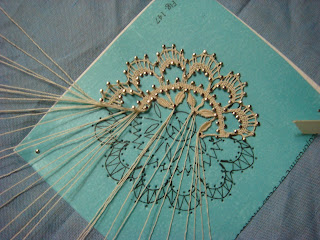 I am using the book by Pamela Nottingham, and doing as well as I can, all the time being aware that being passive-aggressive is probably not the way forward if I want to improve my technique. Oh well, give me time, and I will probably get over it! I have yet to finish it properly, but I am quite pleased none-the-less. 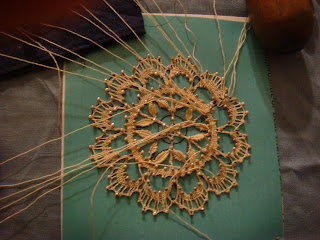 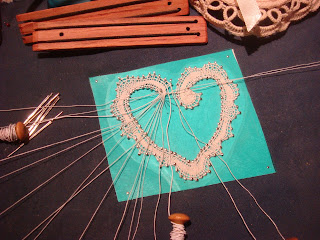 All I have available to show is this heart. I can't work out quite how to do the final bit, I need to join three pinholes, and throw out some pairs...it needs a bit of concentration.
At lace class yesterday they mentioned that IKEA sells tables that are ideal for lacemaking at 19.90 €, what a good idea!
I will try to update when I get back from visiting my mother in the UK. The outer row of the clover doily was chewed by my puppy, and had to be cut off. Luckily the centre wasn't damaged.
Yes-U-can doily, I have done 2 motifs on the next row... a bit bored with that now, I will try to get on with it at a later date.
Posted by Katherine at 1:57 pm 1 comment: 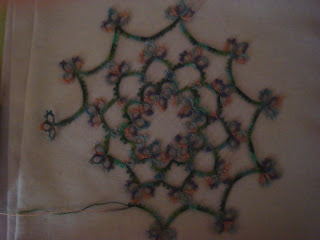 I am always so mean when I wind a shuttle that this kind of thing happens all the time. I need to wind a new shuttle just one repeat from the end.... I will, I will, but not right now. 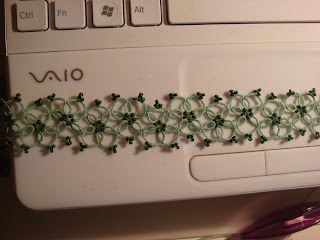 Here is a long bit of beaded tatting which I started, but then found I didn't quite have enough beads... I may work out a solution, or I may just give up. 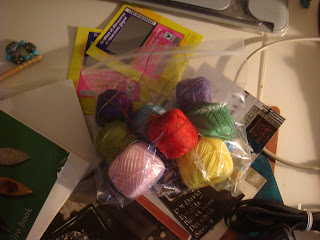 Then a couple of weeks ago Fox shared some thread, Finca 16 in bright colours, which inspired me to start something new. 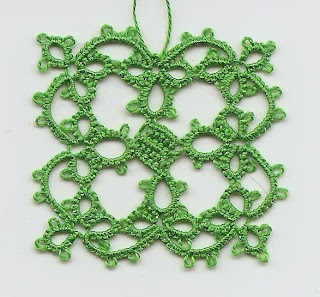 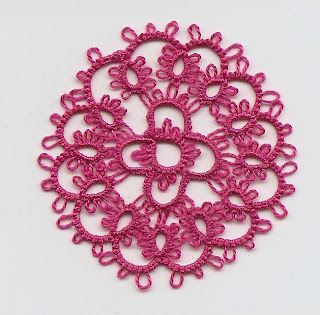 and also started the Yes-U-Can doily challenge on in-tatters.
Posted by Katherine at 7:54 pm 7 comments: 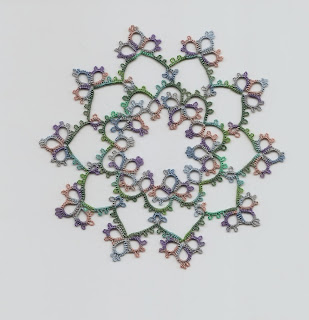 I know I said I didn't want to continue with these threads, but on the way back from Perpignan, puppy was quiet in her corner, and so I pulled out my tatting bag, and found I only had these threads, also no pattern. I was able to download round two with my phone...which seems to me to be amazing. I am afraid I did have a bit of difficulty interpreting it on my phone screen, and so the stitch count may be a bit off, also am I the only person who finds Sulky thread almost impossible to un-tat? It starts to fray very quickly, and I am scared it will snap, so I just carry on even when I have made a mistake, repeating it, if necessary to prevent it from being too obvious. 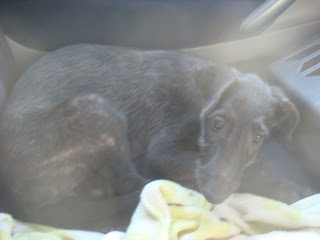 Here is the puppy, watching me in the car. She is amazingly good, no messing in the house, and no crying at night. She and Bess get on fairly well, although Bess can a tad bouncy for such a tiny pup.
The other photo shows the two of them together. 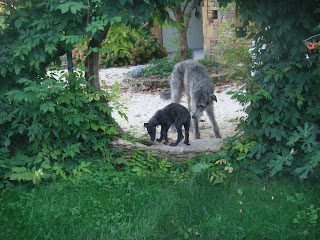 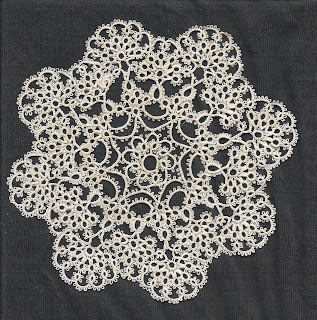 I recently received a' nudge' from a friend, (*waves*) and so I am just posting briefly to let you know that I am still alive.
I haven't done much tatting. and really nothing of interest at all. I can't remember where I was with this doily last time I posted, but I guess that I am a bit further on. The thread is not nice to use, and it is pretty grubby, but there seems no point in washing it till it is finished, and because I don't like the thread I am not so motivated to keep on going. Hey ho.
I have otherwise just done scraps of edgings or else old motifs that I know by heart, to keep my hands busy when I am listening. I have finished the mental health course, but I am about to take the final exams for a French course that I am doing. It helps to tat when I am listening to lectures. 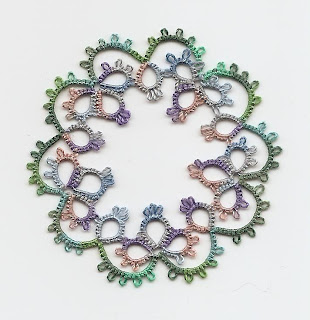 This motif first came to my notice on Fox's page, it  was designed by Corinne. She has invited tatters to give it a try, and so I finally came out of retirement to have a go. These threads are Güttermann Sulky, and they were not what I would have chosen, they just happened to be on my shuttles. I should have re-scanned because the colours are brighter than this, but it's late and I don't want to disturb the man. I see on her blog that now there is more to add, but I think I will start again in a better choice of threads...these don't do justice to the form.
Tomorrow we are going to Perpignan to fetch a puppy.
Posted by Katherine at 10:20 pm 5 comments: 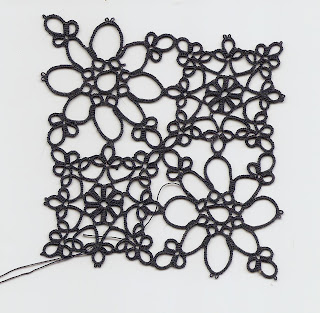 I haven't been blogging anywhere, and I had pretty much decided to give it up, especially as I had bought a new computer and it didn't seem to want to link with my old scanner printer. However I needed to print something and so was obliged to spend a bit more time and thought on the problem, and voilà, I now have it working perfectly.
First piece, this is from Adelheid Dangela's book "Occhi Patchwork". The book is in German, but the patterns are diagrammed, and easy to follow. The idea is that each pattern is named after a German town, and you can join together all patterns that begin with same letter. Here I have done Duisburg and Dresden. The thread is a size 100 lace thread in a very dark blue. It isn't really ideal for tatting...however I do like the look of it. I rather fear that my tension is a bit off, because Dresden is a bit bigger than Duisburg, and in a bigger piece it would be difficult to continue. I might try again with a more biddable thread, because I like the general aesthetics of the patchwork design.
Now although I haven't been posting, and I very rarely comment on other people's blogs, I do check out many tatting blogs every day. I love seeing the work and hearing little insights in their lives. One of my favourites is Tat-ology, and it was reading Fox's blog that was the final nudge to get me to post again. She is so energetic, and updates nearly every day.

Now this strip is an old piece of tatting but I am including it because I was struck by the way Fox had chosen to do the same pattern from Julia Saunders book! This is in Valdani size 50. 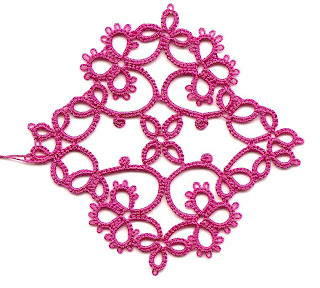 Then I saw that Fox had also chosen to do this pattern from Mary Konior's book Tatting Patterns which I received for Christmas. It was an odd little motif, and I was surprised at myself for choosing it, so it was extra weird when she chose to do it too. This is made in lovely DMC dentelles, which are really my absolute comfort zone thread. 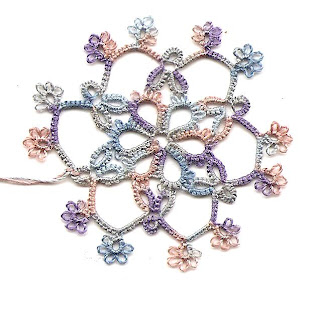 And just to finish off, here is another motif from the same book, this time in Gütermann Sulky thread.
I wonder if anyone else notices that someone else has chosen the same pattern as them.
Posted by Katherine at 3:45 pm 7 comments: