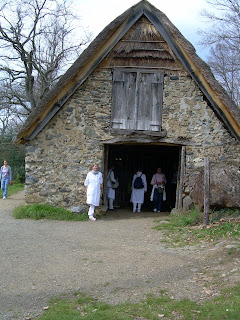 I have finally finished this bookmark. The pattern was from the internet, Leonora English. It was not too difficult, but I'm afraid the tatting is a bit sloppy and doesn't do the pattern justice. I did quite a lot of tatting while I was in Lourdes. There were only five nurses for 98 patients, so it was lucky I was able to go. Obviously we had to provide 24 hour coverage, which meant each of us doing a shift each day, and one doing nights. one night each. As I was the only one used to the variety of insulines and blood sugar monitors I was also allocated that duty, three times a day. It was lucky, too, that I didn't want to go to any of the services, but I did join the pilgrimage to the village where Bernadette grew up. The photo shows me outside the bergerie where she looked after her sheep. While on night duty, I taught my colleague Annie to tat, my first ever successful teaching! I have to say though, Annie is extremely determined, and has walked to St Jaques de Compostelle three times, and then to Rome! alone and at the age of 62. She slept rough, and asked for food along the way, and I think she's extremely brave.
Posted by Katherine at 2:49 pm 2 comments: