Time isn't the only thing that is running out!

I am due to go to Australia on the 8th November, to spend some time with my eldest daughter. The travelling time is 36 + hours from when I leave home on Sunday lunchtime to arriving on Tuesday morning in Melbourne, and obviously much of my awake time I would like to be tatting, while I listen to my Mp3 player. But which pattern, which thread? I haven't made my mind up at all yet. 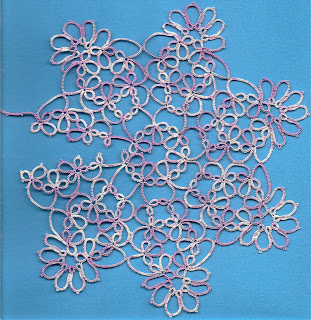 Cornelia is making slow progress, and I would really like to finish it before I leave, as there isn't enough work to last for a whole journey. I am a tad worried that I won't have enough thread to finish, again. I had thought two skeins would be plenty, after the business with Beatrice, but of course Cornelia is a bigger doily. I would recommend the David Reed Smith shuttles for work like this, my one holds the most thread of any of my shuttles while at the same time being light and maniable. 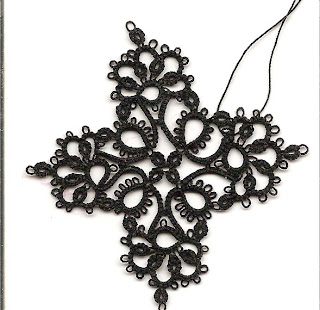 This is another of the Myra Piper designs in black. Not finished or blocked, but quite pretty, nonetheless. Perhaps I should stick with several small designs during the voyage, but then I would need a book of patterns....
Posted by Katherine at 9:31 am 3 comments: