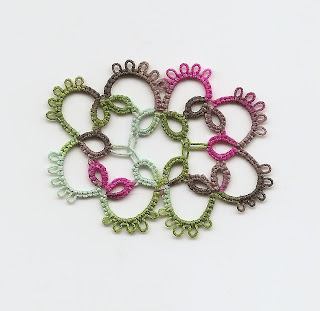 Last week I was 53, and I received a lovely card and some HDT from Fox. The thread was dyed by Tat-ilicious and was called "Young Hearts". It's a pretty mixture of greens, pale blue, brown and magenta, to which my scanner does not do justice.
My first tat was this Celtic picot motif from Jennifer Williams. I had seen Fox do it and wanted to try the new technique myself. It is more fiddly than exactly difficult. 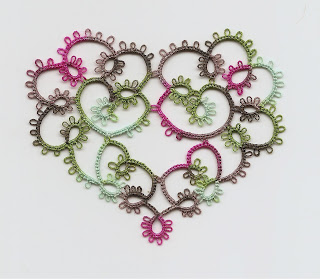 Then I decided that Young Hearts should be made into Heart's Desire...however this is not a pattern to be made while watching television. This one is so full of errors I am ashamed to show it, except that sometimes it's fun for other tatters to enlarge and spot the mistakes. I am no longer sure how many there are, at the time it seemed to look awful, and now it looks ok. Bizarre!
Posted by Katherine at 10:40 pm 6 comments: 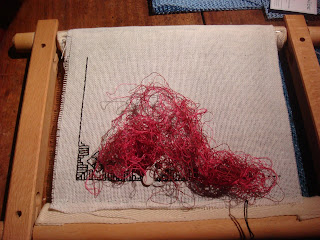 I haven't been able to tat for a few days, I did a Fox! I was cutting up onions and sliced into my left index finger. David appeared just after saying "Did you notice that I sharpened the knives?" I held up my bandaged finger with a wry smile..."I did."
So I started some blackwork, oh and some untangling, because Guinevere loves to steal thread and tangle it for me, and this is Tatskools HDT choco-raspberry which I was planning to use for another try at the pomegranate edging, this time using Frivole's version.
Posted by Katherine at 1:12 pm 2 comments: 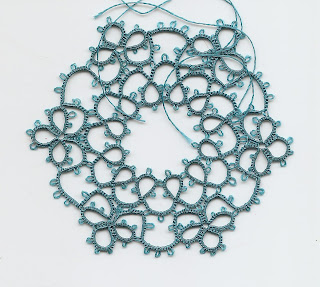 .I tatted this motif with the shiny rayon thread. It tats up quite well, even if it's a a little bit fiddly sometimes, however I just gave up when I tried to sew in the ends. I couldn't get them to go where I wanted...I expect I will just have to try again, perhaps a finer needle would help. Fox, did you ever try sewing in the ends?

Now this is an edging I saw on Frivole's blog. I don't follow all that many tatting blogs any more. Once upon a time in 2006 when I was just discovering the online tatting world, via Sharon's 25 motif challenge, I would check every blog on her list! Now I just watch a handful, although I do sometimes wander around reading all sorts of blogs through the list on the side bar. I don't comment much...I don't know what to say, but I do find a lot of inspiration that way. Well, so I was reading way back on Frivole's blog and this edging caught my eye. I found a copy of Anne Orr's book, and decided to have a go. I wanted a Pomegranate coloured thread, but I am not sure who dyed this thread or what it was called. I am pretty sure it was either Yarnplayer, or Tatskool. I think it's quite a good match, in any case, although I am sure that the fruit didn't figure in the name! :)
Pomegranates are a frequent symbol on Tudor blackwork, due to Catherine of Aragon, and I think that is what made me want to have a go. 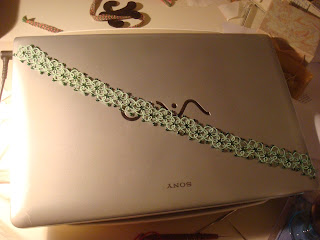 I can't remember when I started this beaded necklace, but it was over a year ago. I finally picked it up again and jolly well finished it! It had kicked about because I was nine beads short...but I used a slightly different colour for those last few, and I don't even think I am likely to wear it, so no-one will ever see, but it is done, and I can clear the box away. 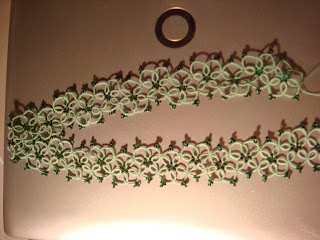 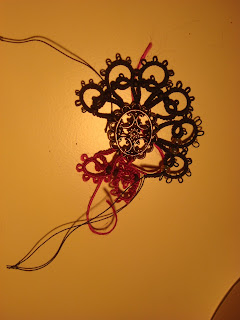 I did a few more experiments with the doodad. The blue beads look better with the magenta silk, but no way am I going to tat all way round with that silk. It splits and it won't slide up and it twists...no not that. The blue buttonhole thread is a good thread for holding its shape, and in fact I have some silvery blue beads that don't show up so well but the are quite pretty with the blue. I think I will give those a try. 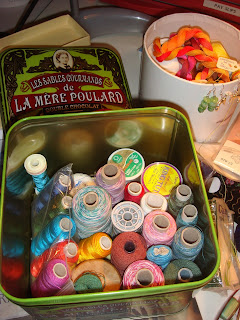 Christmas is a time when food comes in tins. I bought a box of sablés really just for the pretty tin, because I don't like chocolate. Luckily my children were noble enough to consume them. :)

The tin is great for storing thread, especially as I have such a naughty puppy who steals thread and chews it up. Then last week they had some more sablés in a different tin, but we haven't finished those ones yet. I have plenty more supplies to keep in there when it is empty. 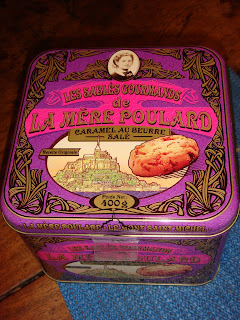 The snowflake doily creeps on, still three more repeats, and the hanky edging still has eight more to do. 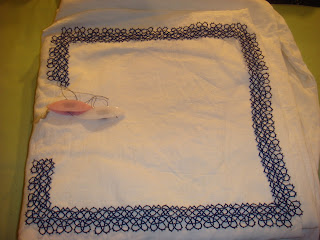 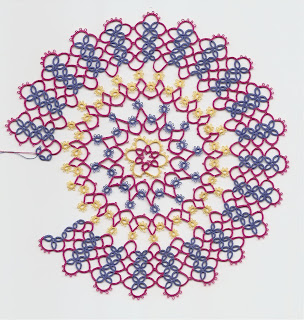