My bag was at the Mairie! I went to Prayssac with some posters to put up, and the ladies at the Boulangerie said to ask at the Syndicat d'Initiative and the Mairie...and there it was. I nearly kissed the Policier who gave it to me.  So happy, especially as it had a special Shuttle Shop shuttle with my name on. However I seem to have lost my tatting inspiration, and everything I try goes wrong, ah well, perhaps I need to look for that as well!
Posted by Katherine at 9:12 am 6 comments: 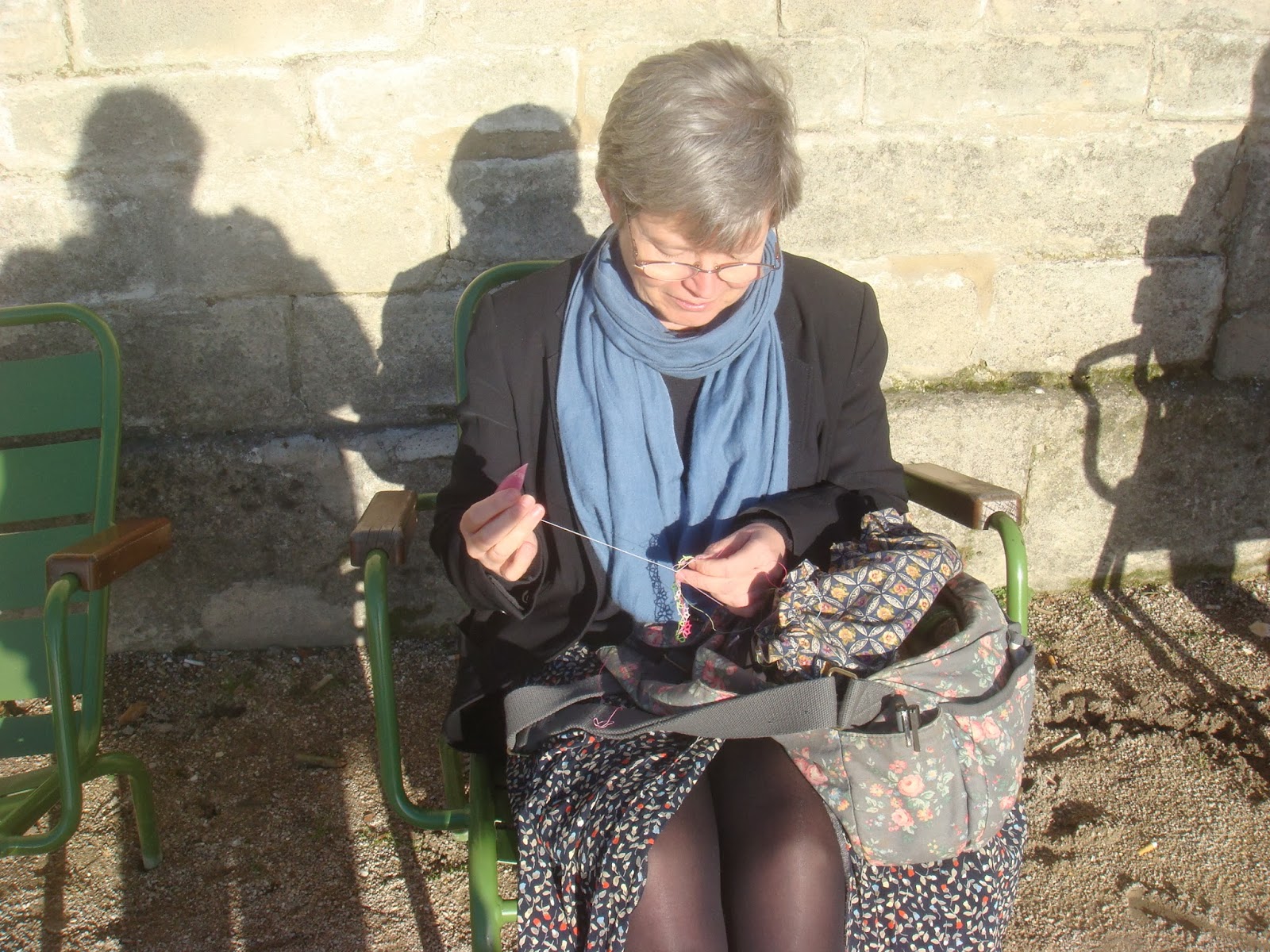 Somehow I have lost my tatting pochette, which is in this picture. :(
From DS9 designs it has been with me for 10 years or so.
It was in my bag yesterday, but when I came home from the bank it was no longer there.* It has some shuttles, scissors, hooks and my current bits of work, so I guess they will never be finished.

Heyho, many far more terrible things happen, I hope whoever found it treasures it, even if they have no idea what it is all about!

* I did go back today and ask, but no one has seen it. 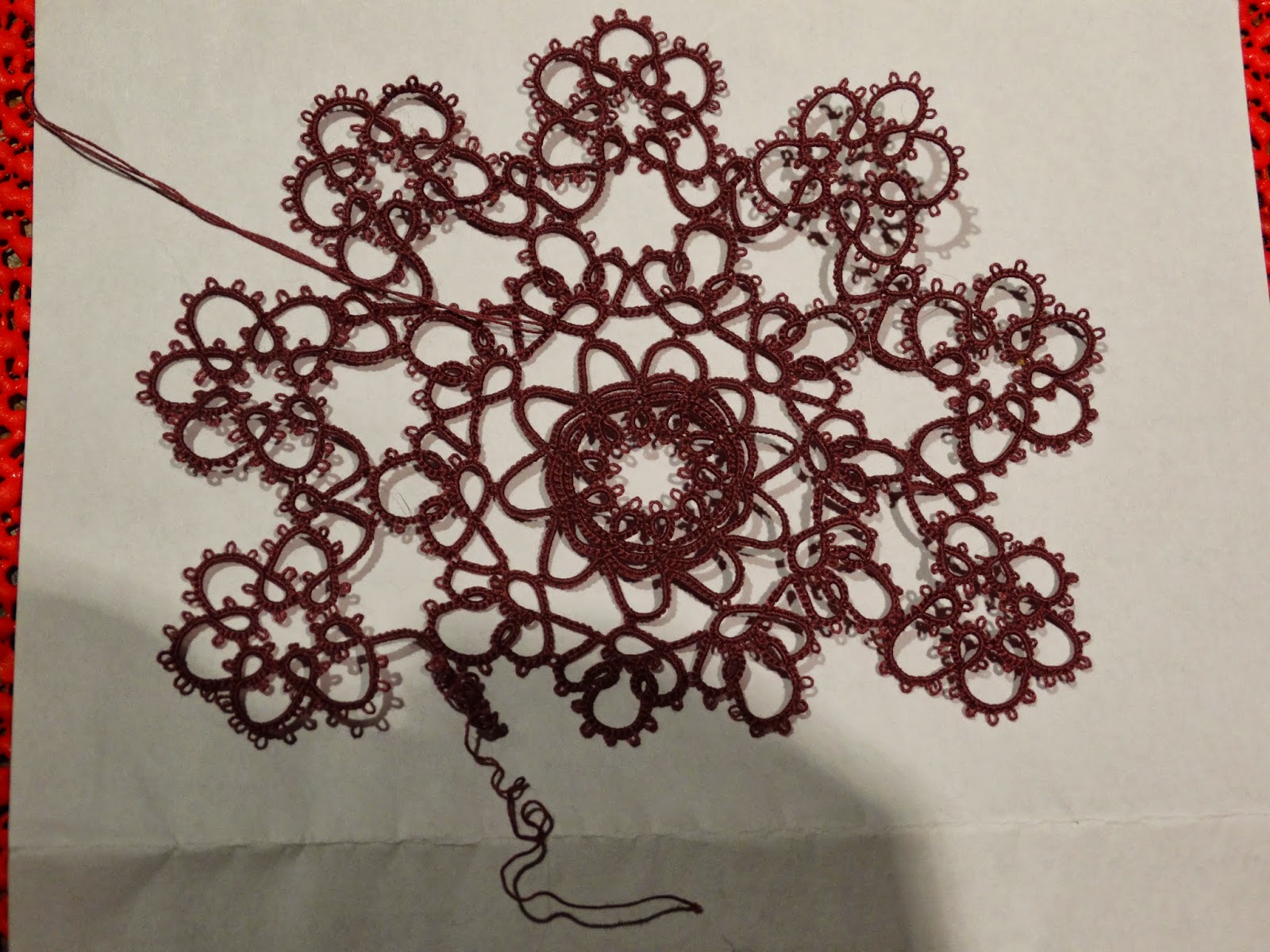 Onto the bandwagon.
My first attempt at the Spring doily, mistakes a go-go! 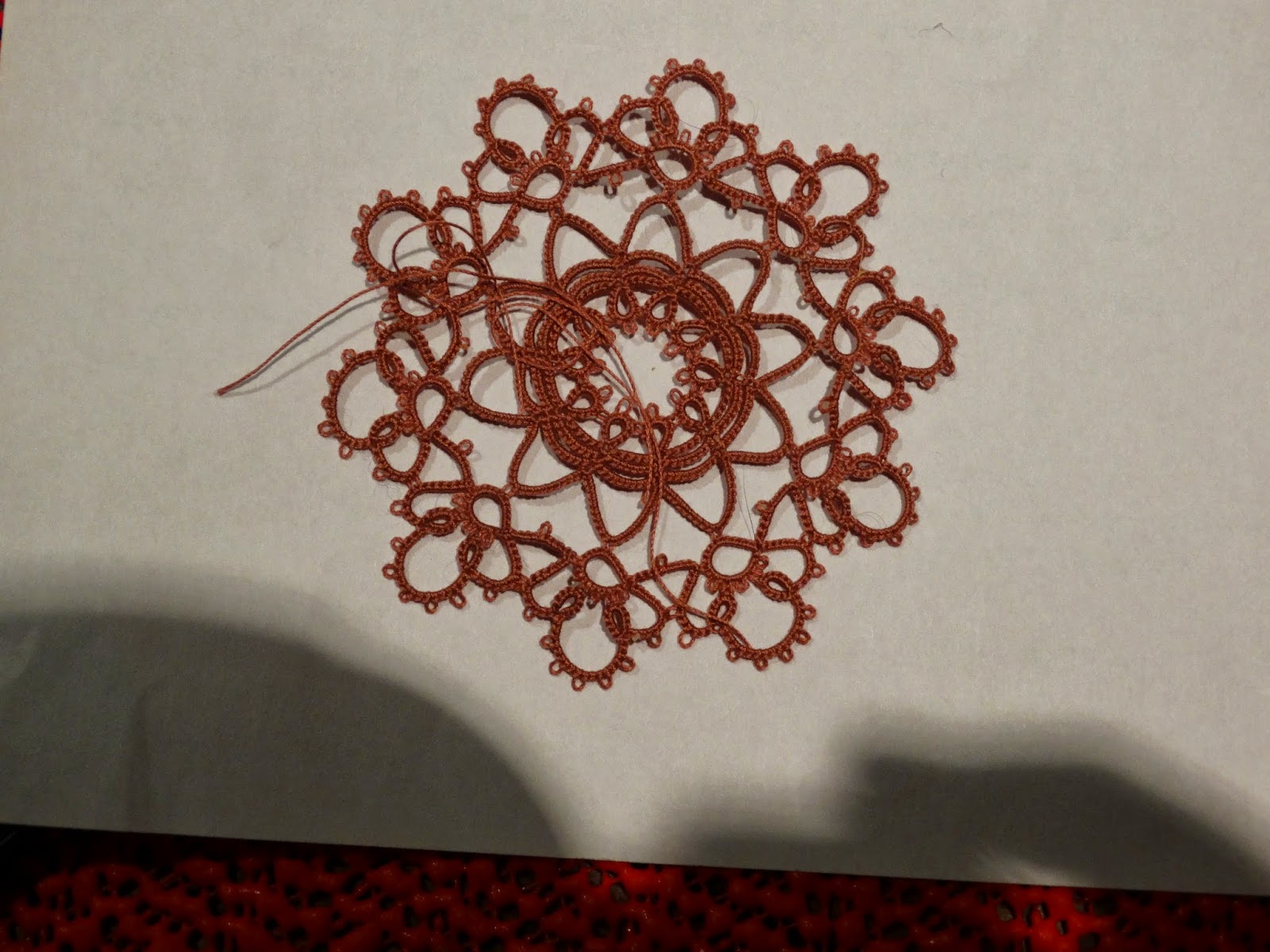 Second attempt, both are worked in Majestic thread, which is a little bit twisty, but the colours are wonderful.
Posted by Katherine at 10:46 pm No comments: 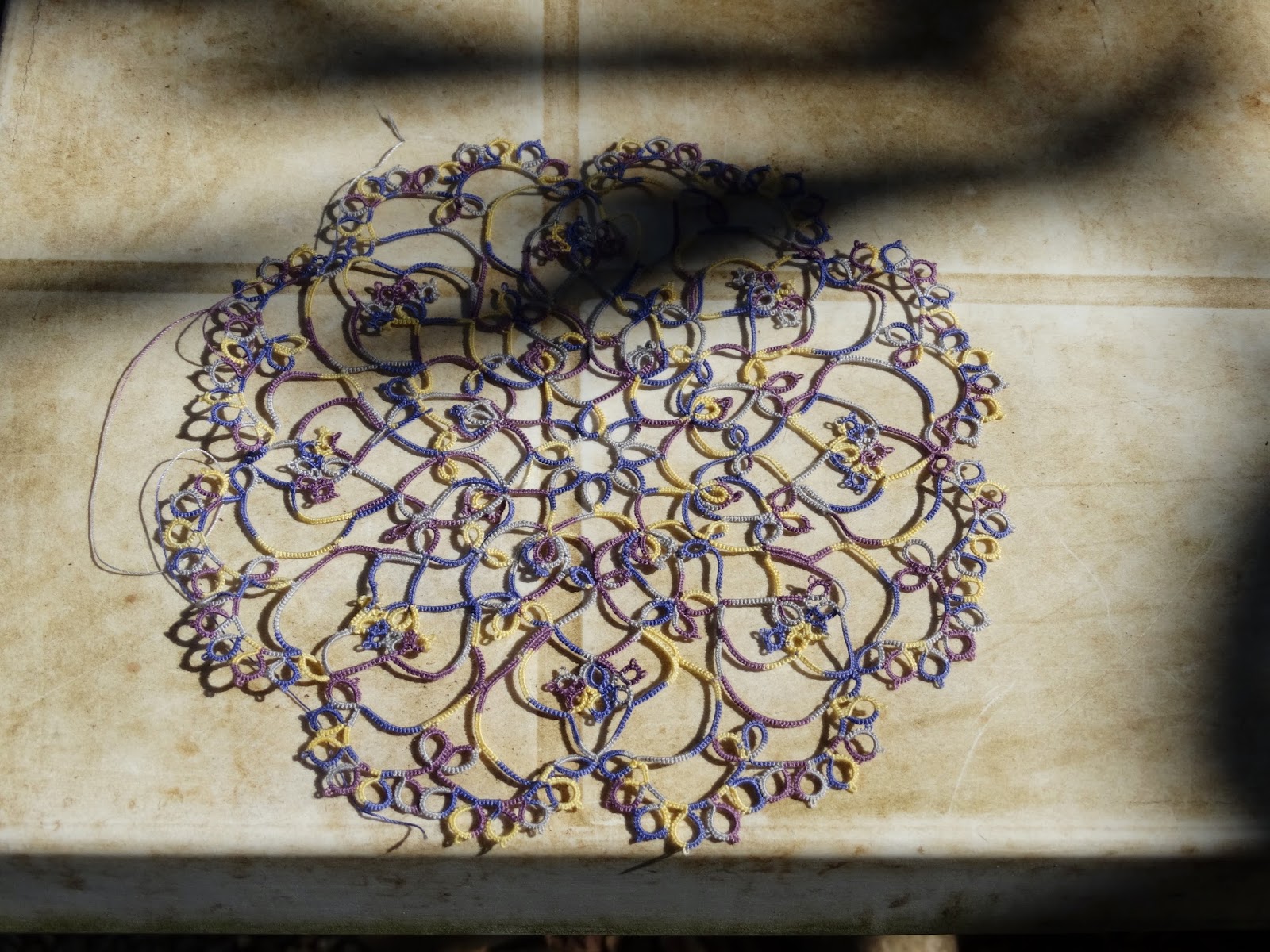 I have at last finished Delia, but I haven't been making any kind of lace/crafty stuff.
I have hopped onto the bandwagon which is Renulek's Spring doily, and I hope to share a photo tomorrow of the rather disappointing progress so far.
Posted by Katherine at 8:37 pm 4 comments: 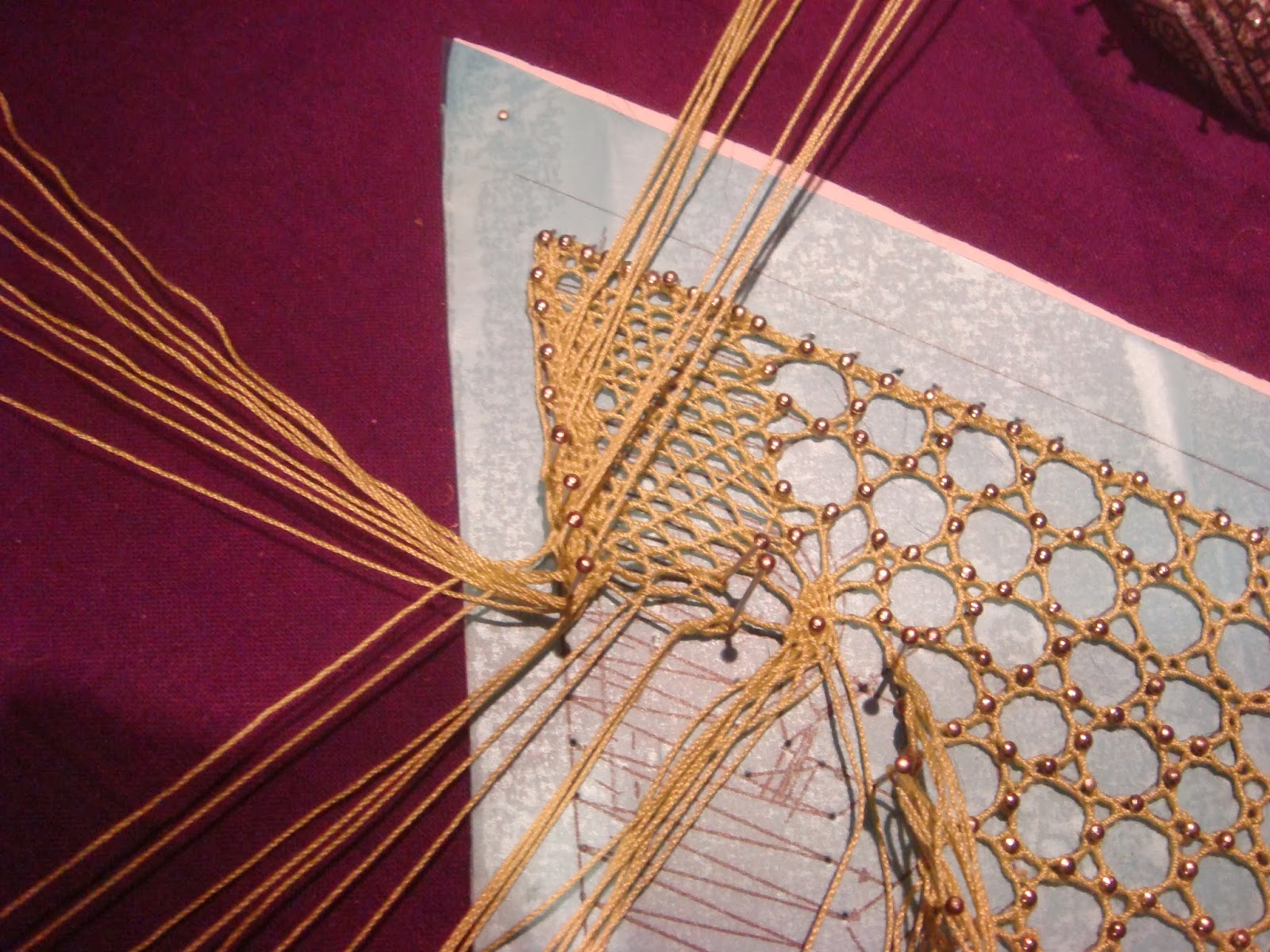 This tiny patch represents three hours in lace class! Of course much was done, then undone, then redone. I am learning to throw out pairs from the half stitch section, as well as the 12 legged spider! I know it looks easy, but I really struggled...I must try to keep going because I leave to stay with my mother on Saturday, and if I don't practise I will forget how to do it. :(
Plus as luck would have it I need to work today and tomorrow. 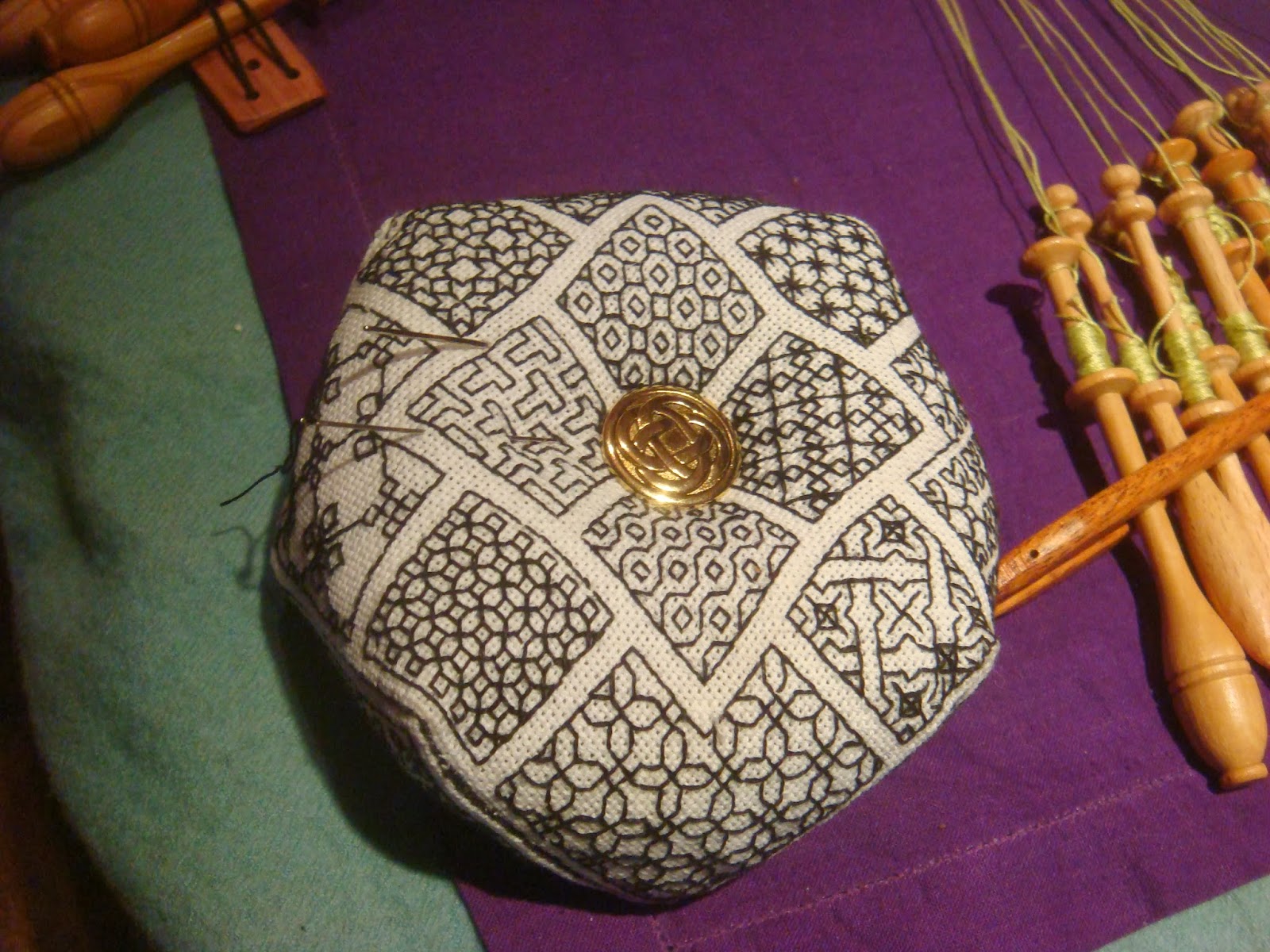 Oh, I am including the finished pincushions, with the buttons sewn on. 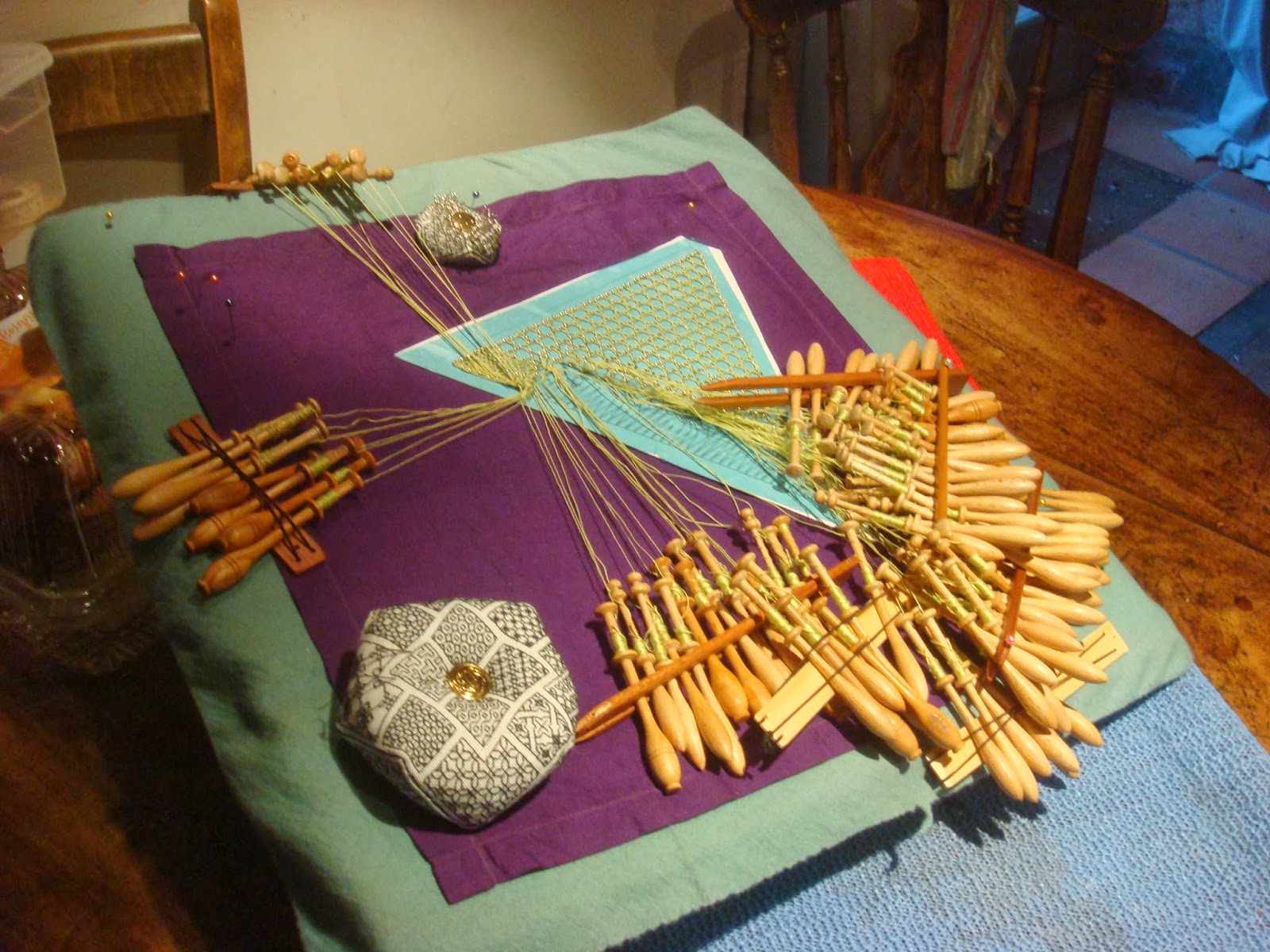 They were fun to make and I have some more evenweave, so I might do some more blackwork...although the evenweave is green, so I am not sure how well it will work.
Posted by Katherine at 10:36 am 2 comments: 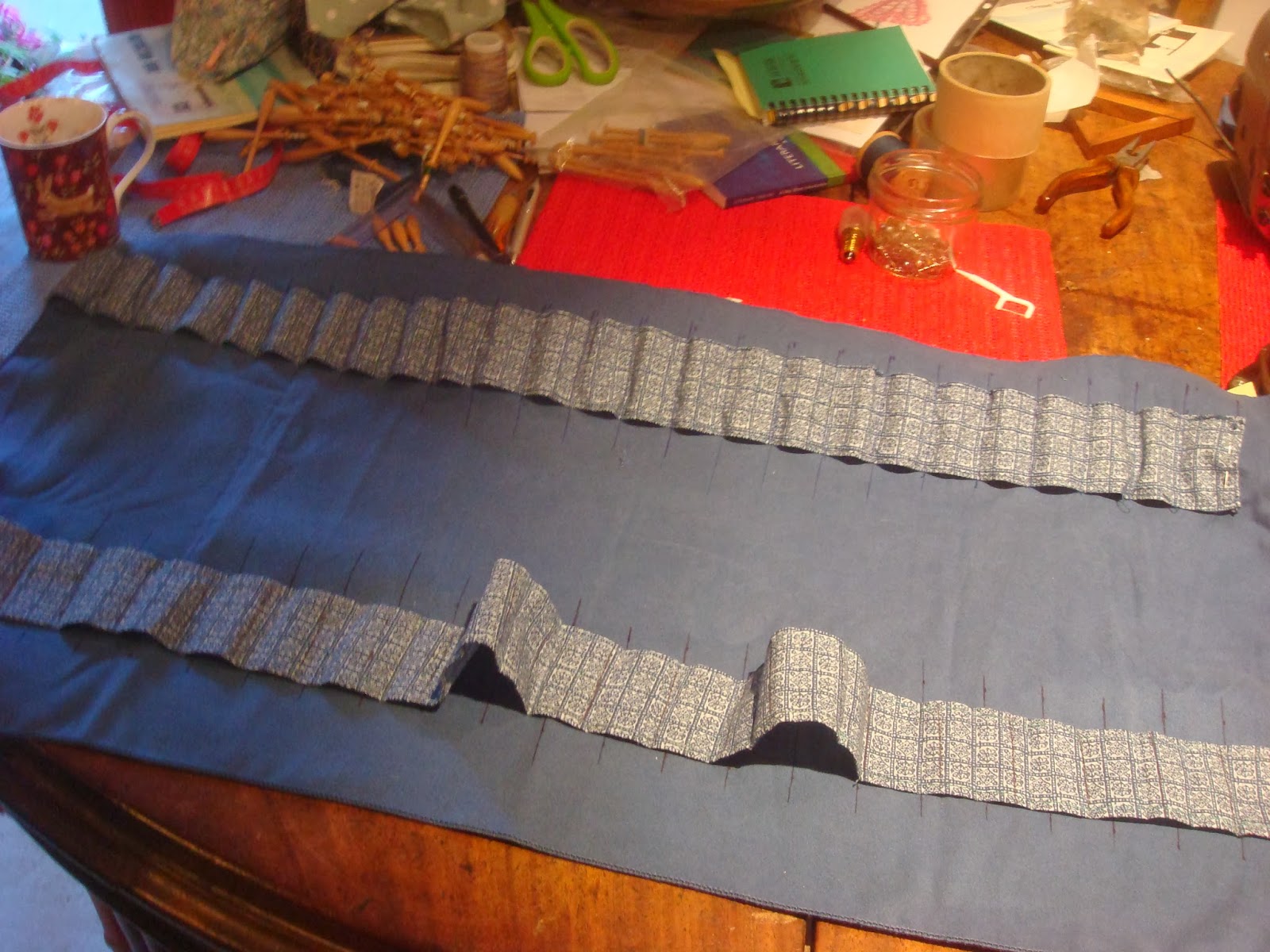 I had to make a bobbin roll for all 52 pairs I needed for Monday's lace class. 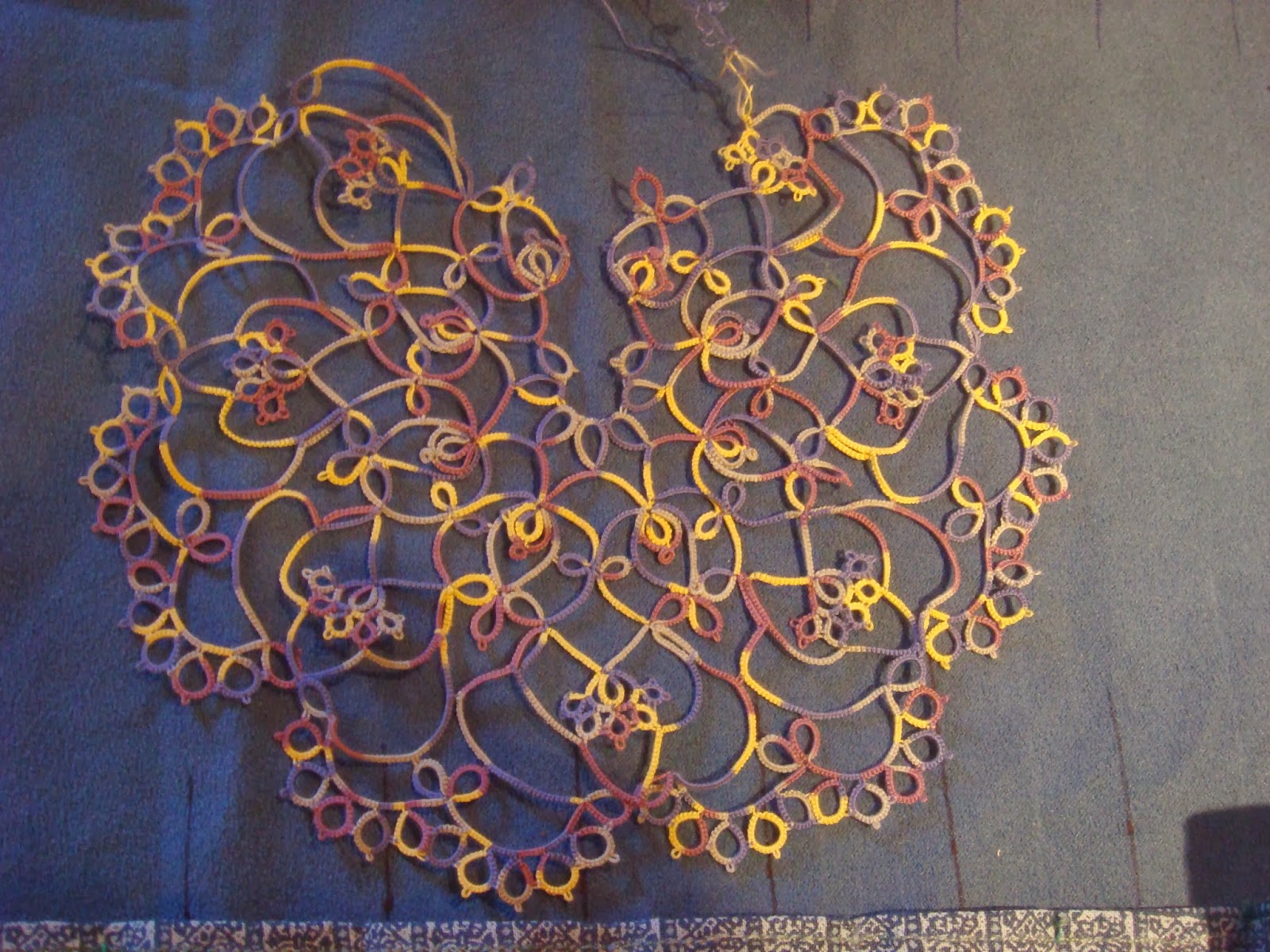 Delia is still causing me problems, I had to cut again...I have lost my enthusiasm. I get like this when something takes too long, hence the heaps of WIP hanging around on my desk. 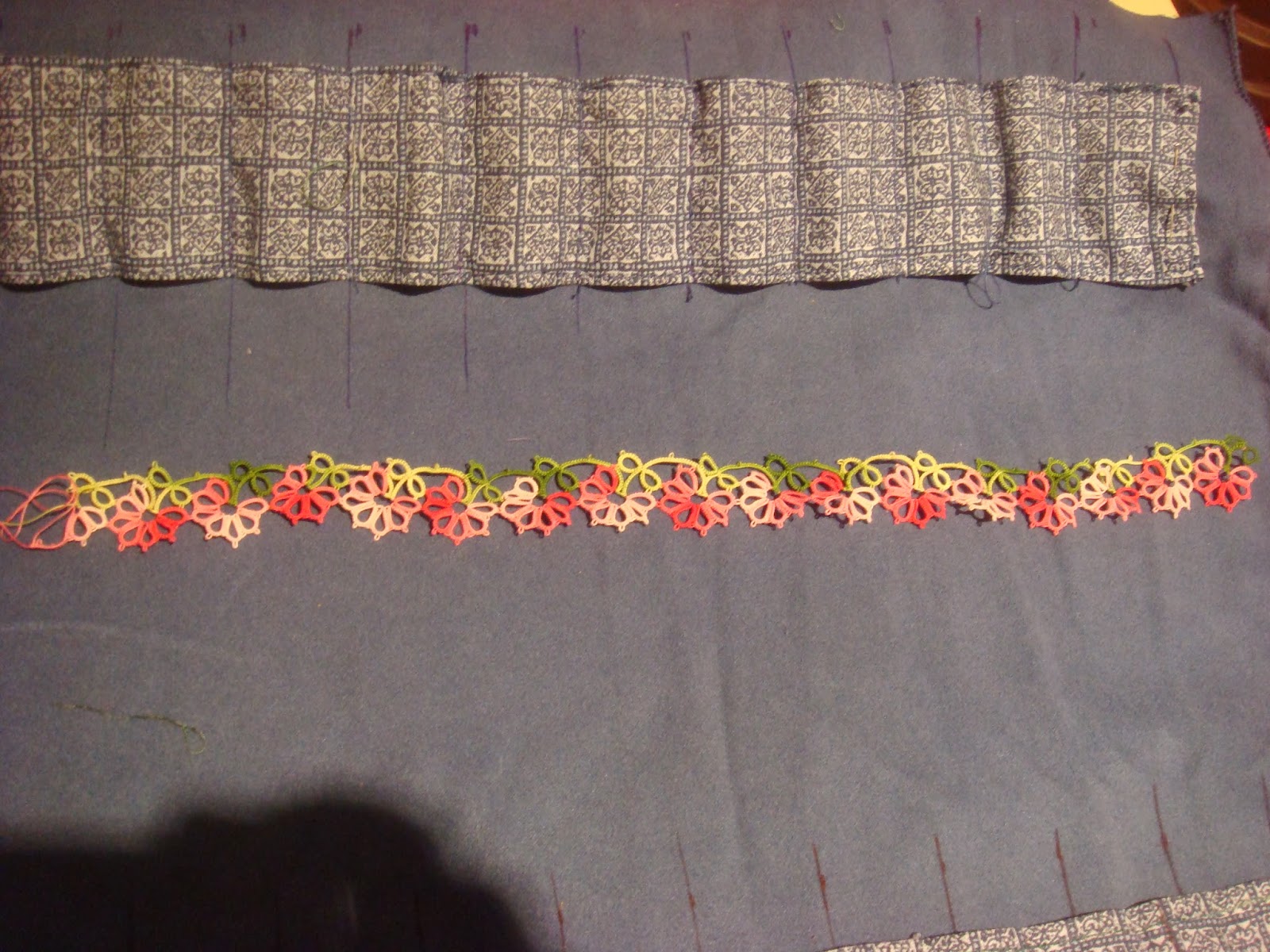 I am continuing this edging slowly, I have a plan for it. 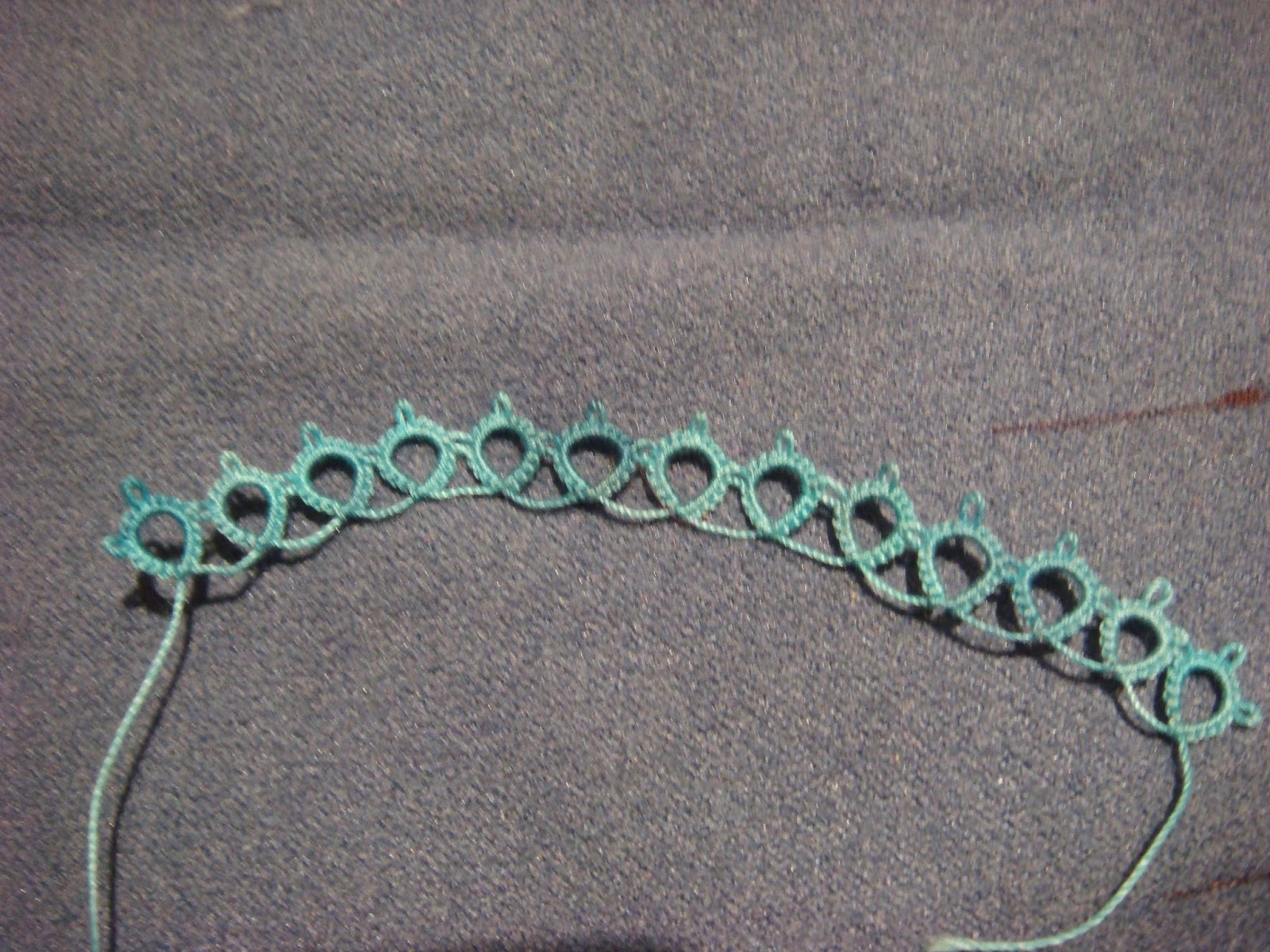 I made this while waiting for David, and having nothing in my bag but a lonely half wound shuttle! 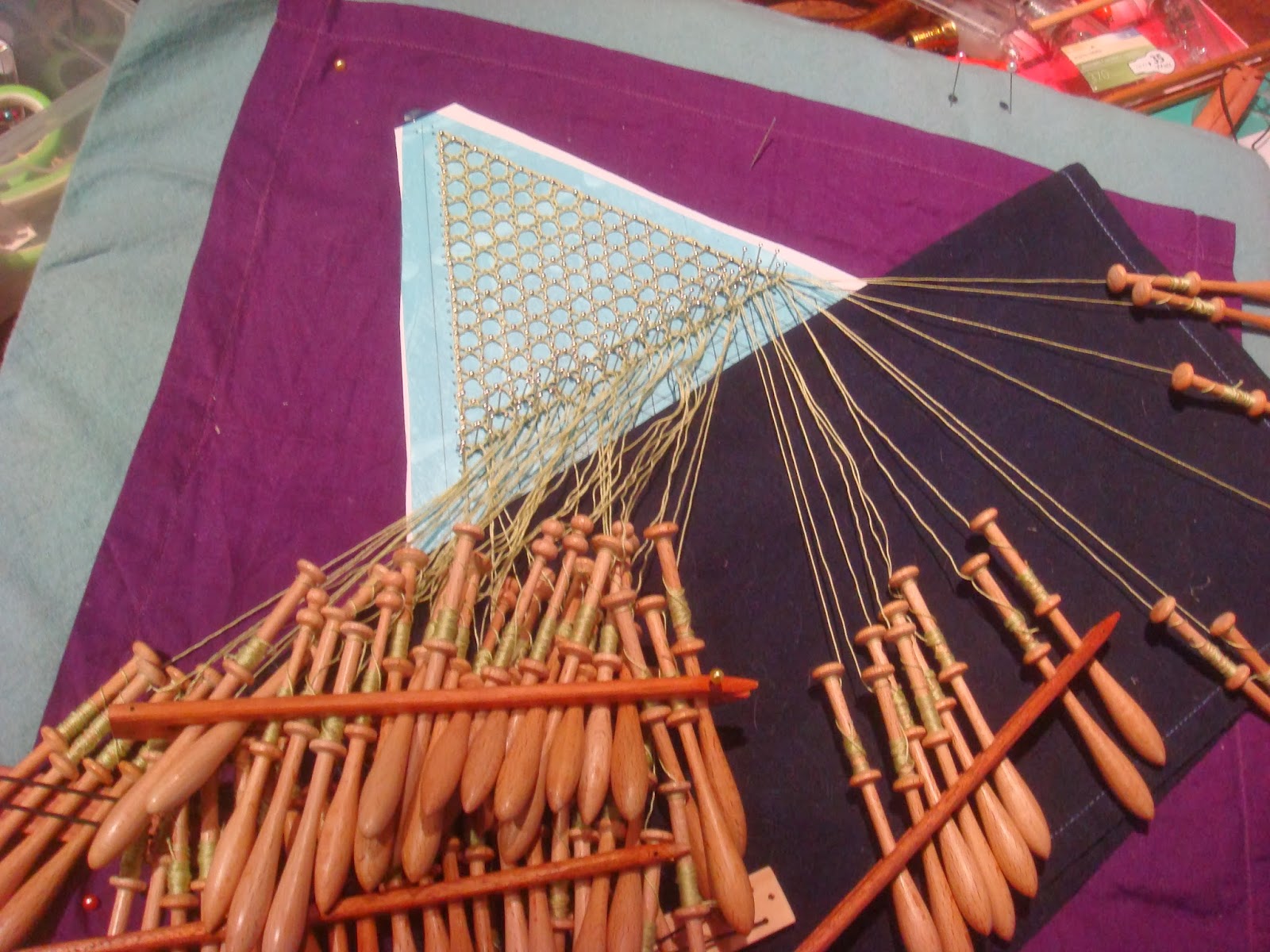 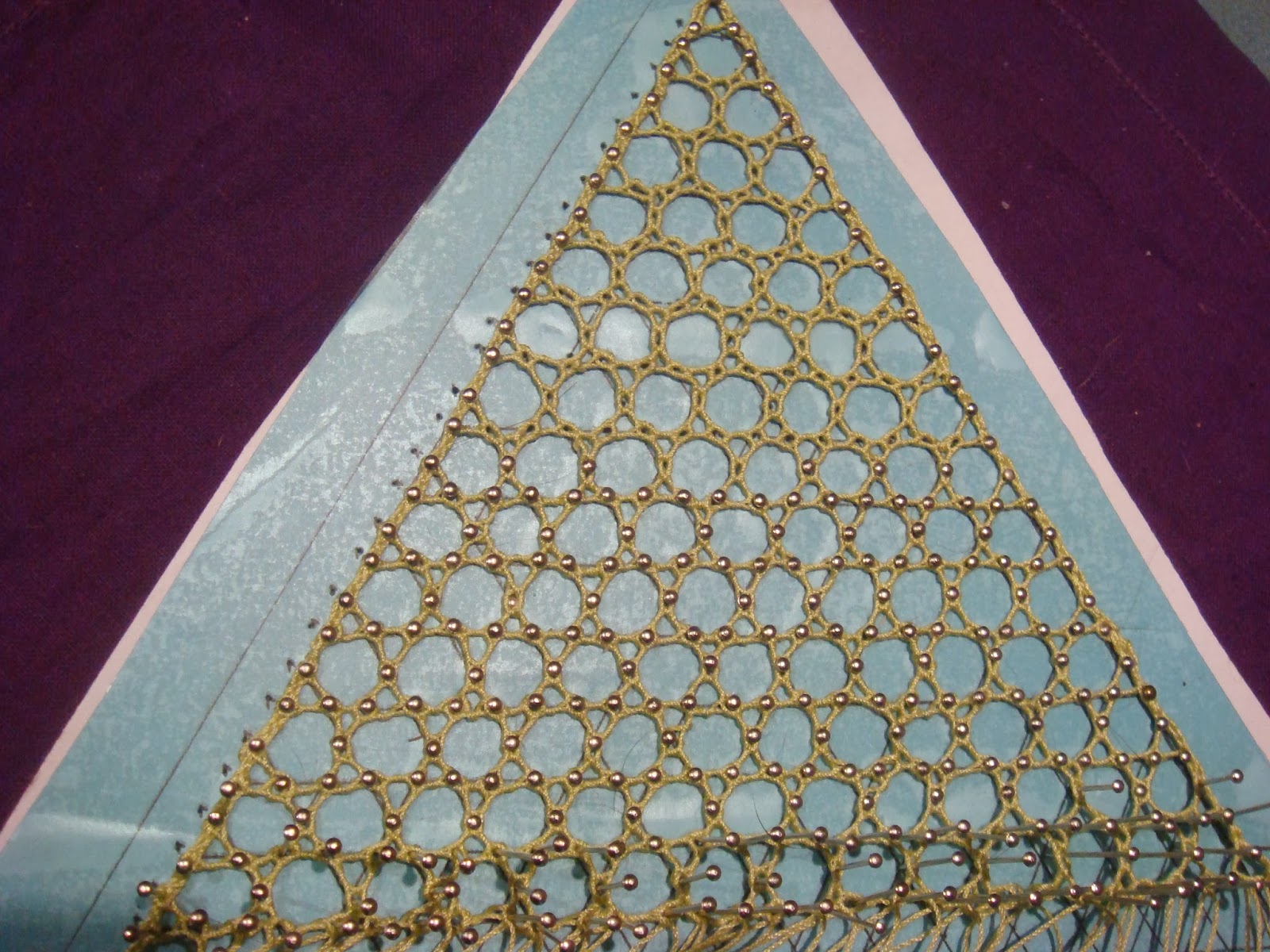 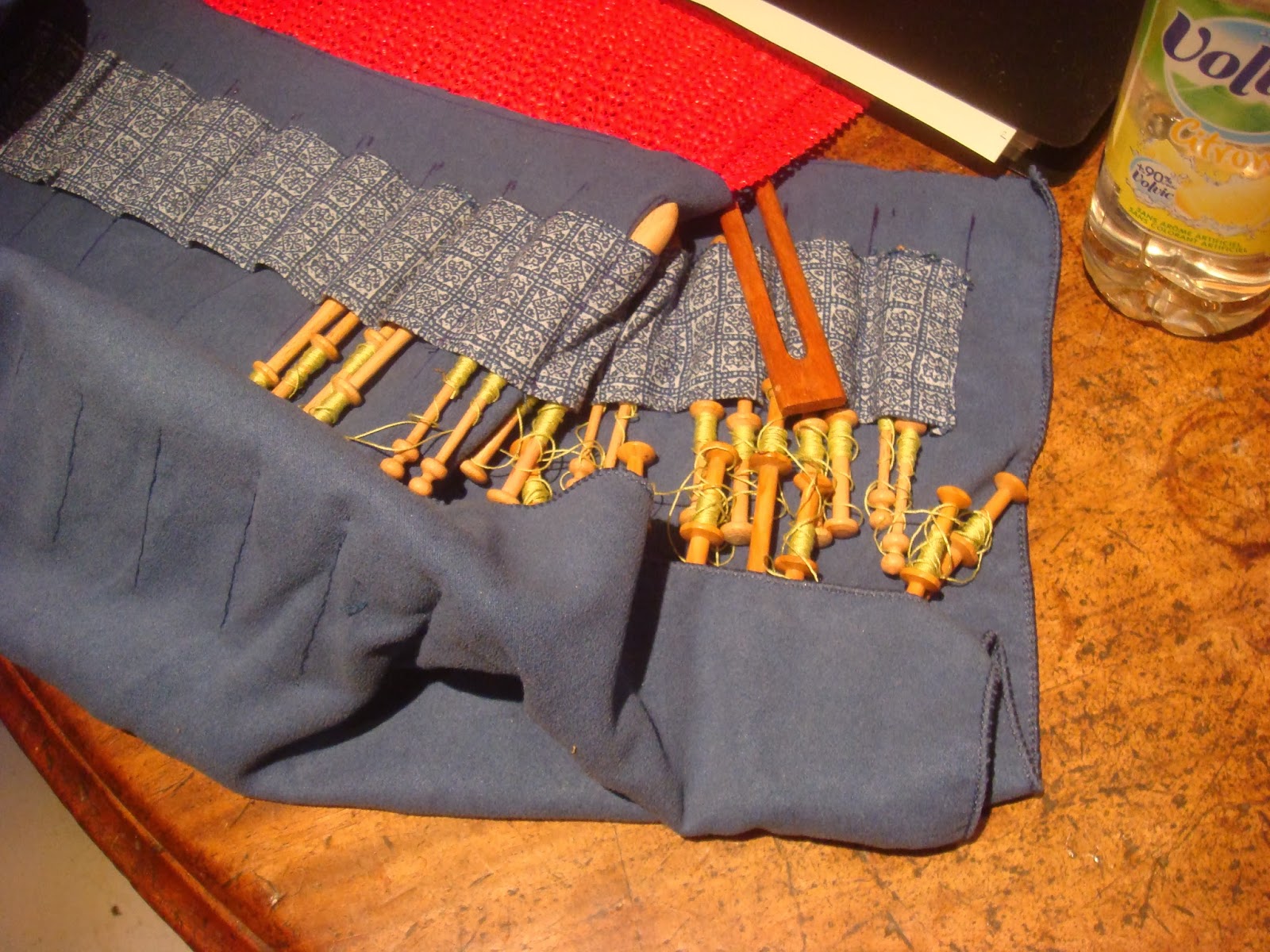 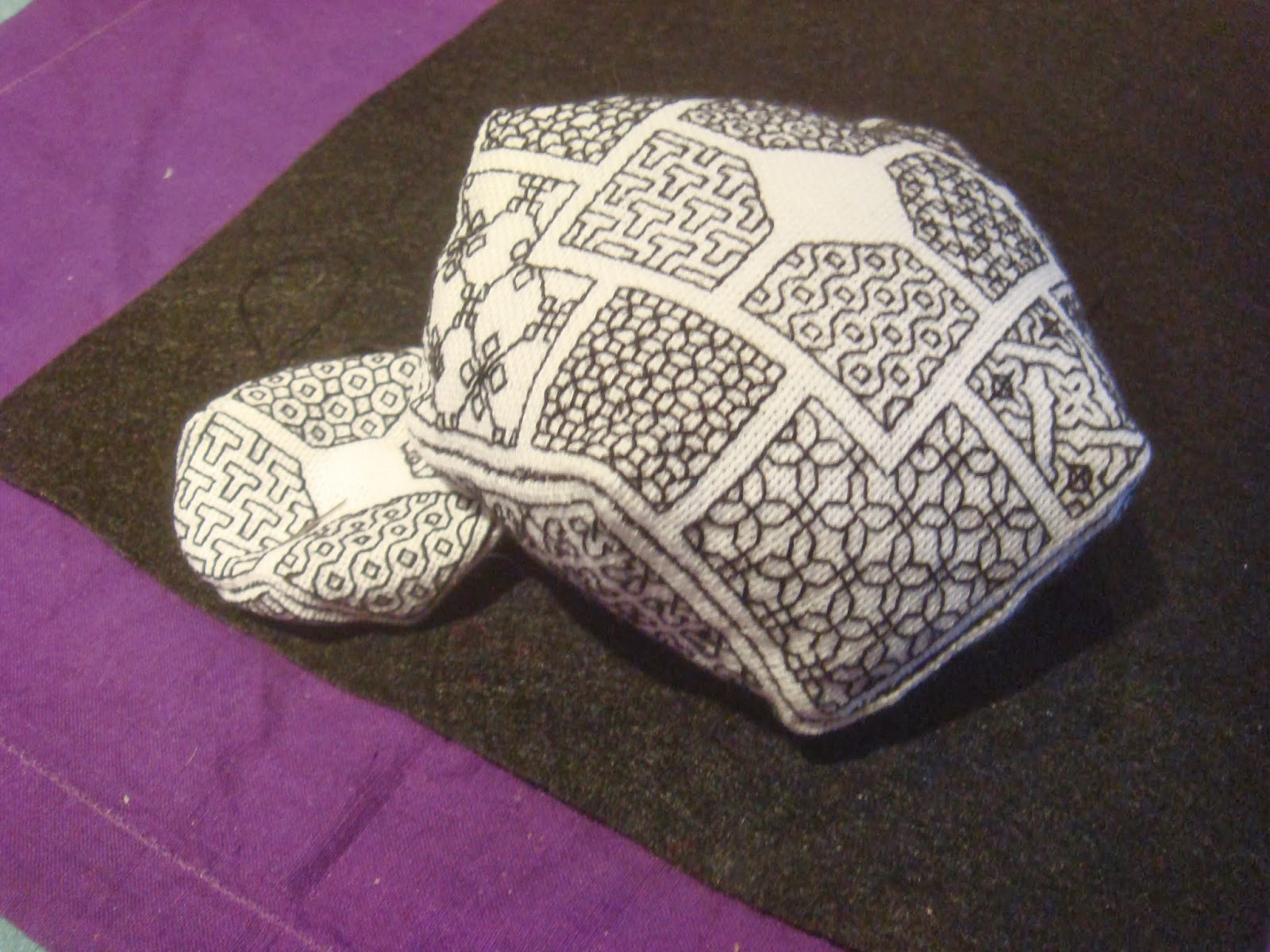 My blackwork project is done, well I still need to finish stuffing and add the buttons, but I am happy with it. I might even make another one. 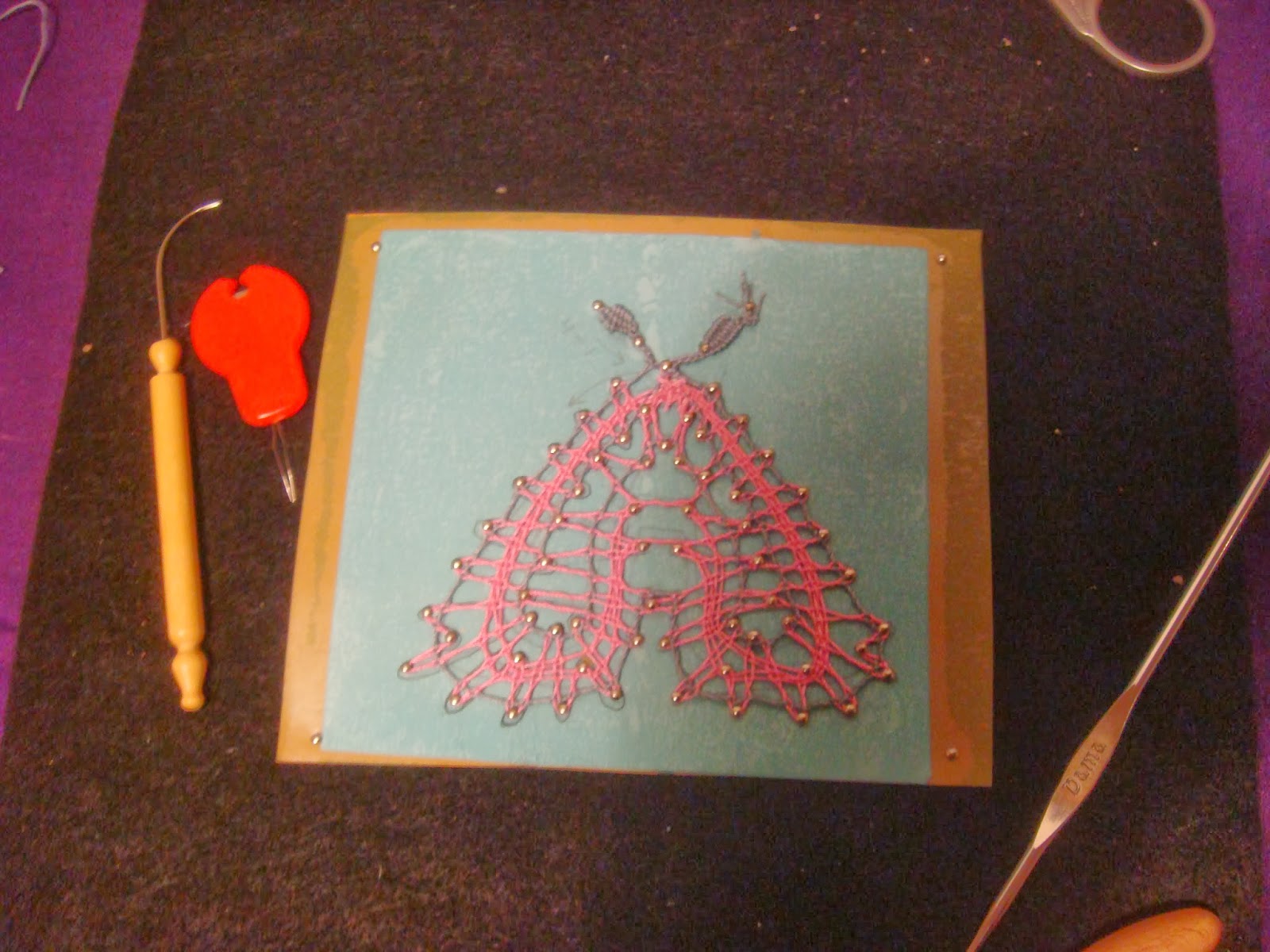 This lace butterfly was quick and easy, except I will never try to finish with a cluny again! Another time I will start the two antennae, then join at the head and then work the wings. 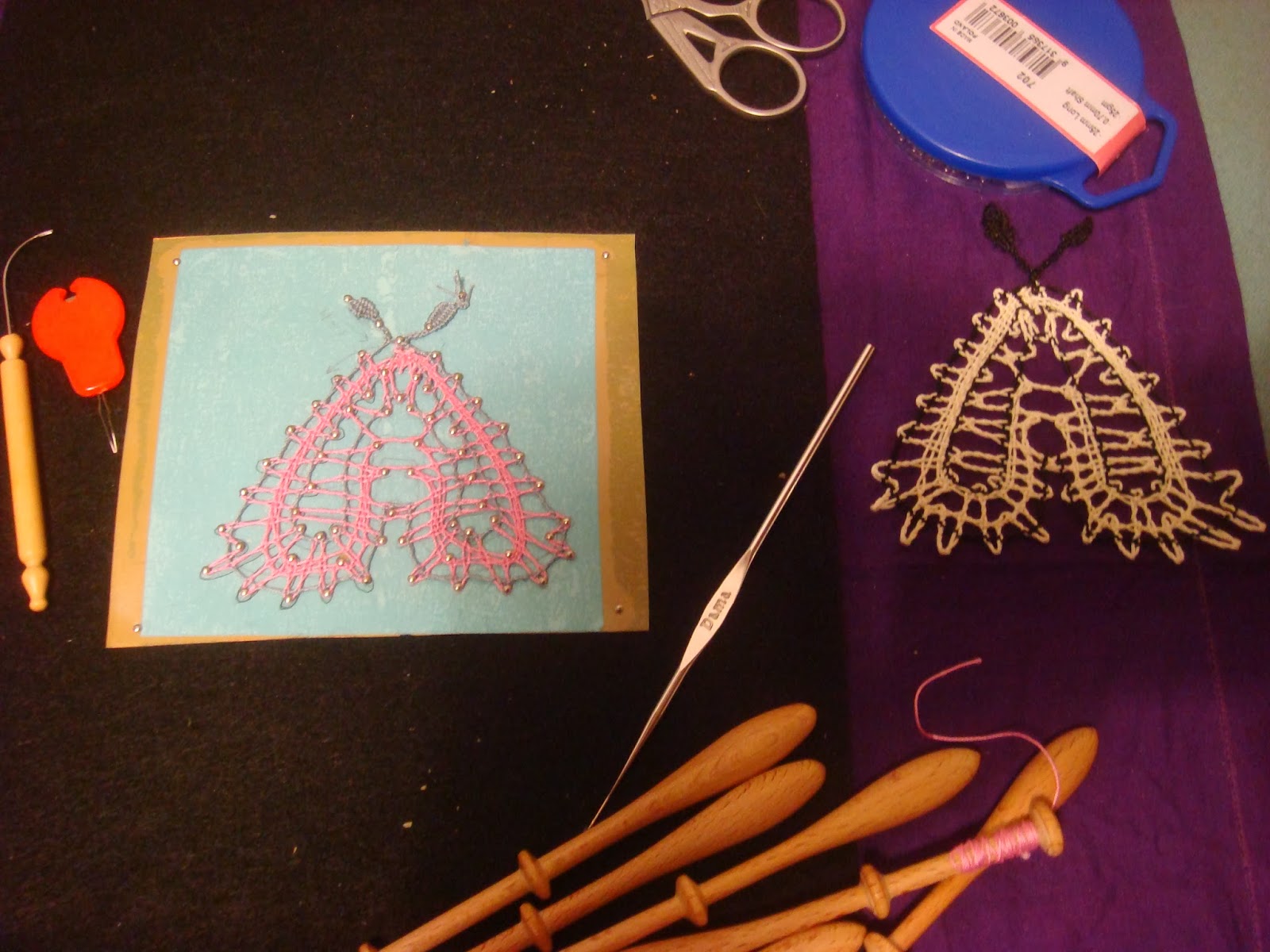 The cream and black one was worked by a friend at lace class. She also had difficulty finishing with a cluny!
Posted by Katherine at 9:13 am 3 comments:

The week before Christmas my friend closed her patchwork shop, after two years business. She had some tatting thread that she had ordered, when we hoped that people might be interested in learning, but now unsold it was just unwanted stock. I felt duty bound to buy some even though they were not colours I thought I wanted. The photo isn't very good...but they are classic DMC variegated threads. 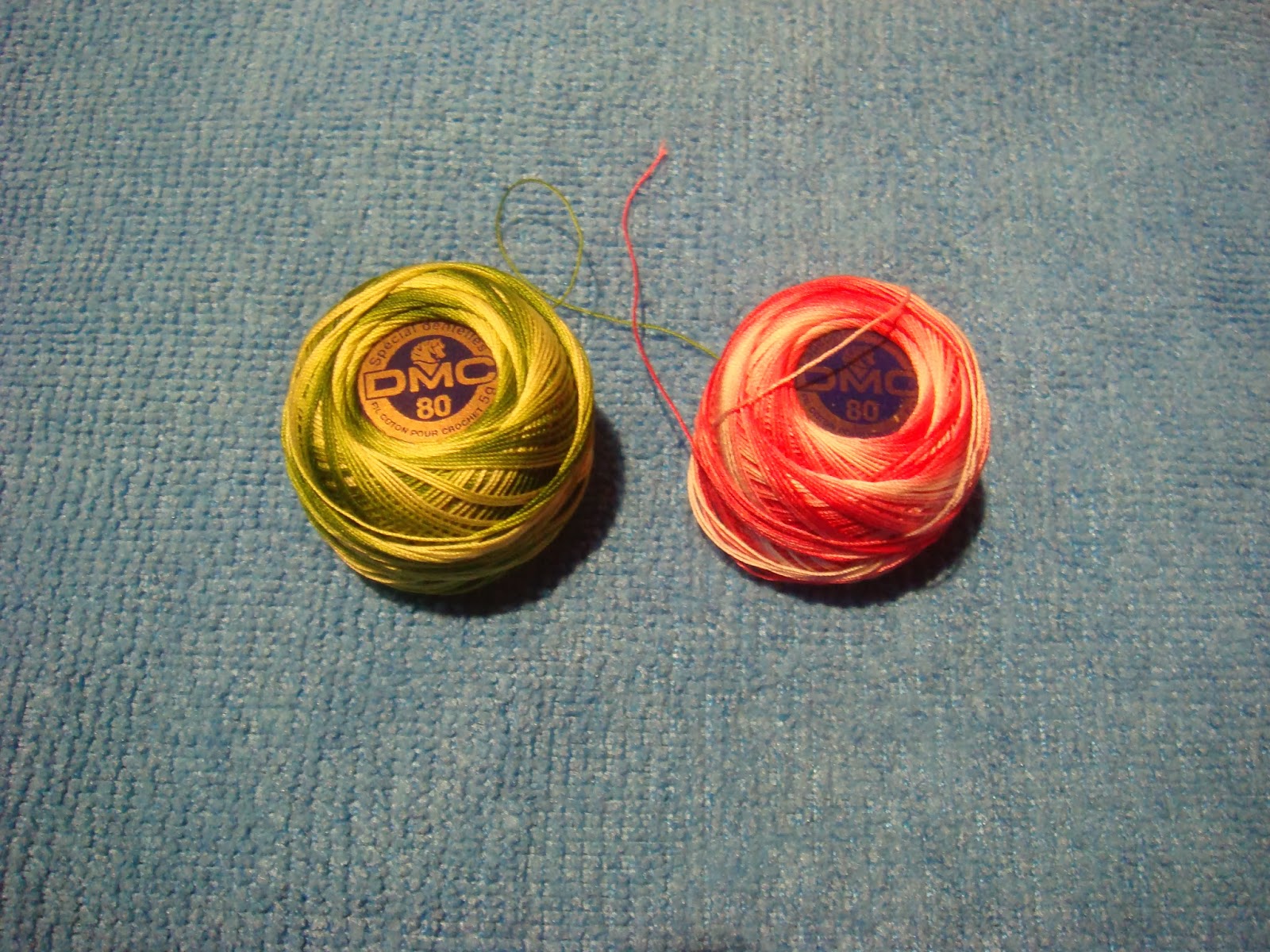 Then last weekend, having not tatted for ages, I was travelling by train to Paris. I didn't want to take any of my multiple WIPs, as they are all at stages where I have to do something fiddly to carry on. I decided to do an edging, which means that I don't need to refer to a pattern, and it doesn't matter how much I do.
I chose an old favourite and the new unchosen threads, so that it wouldn't matter if it got lost or mistakes were made.... and I did this: 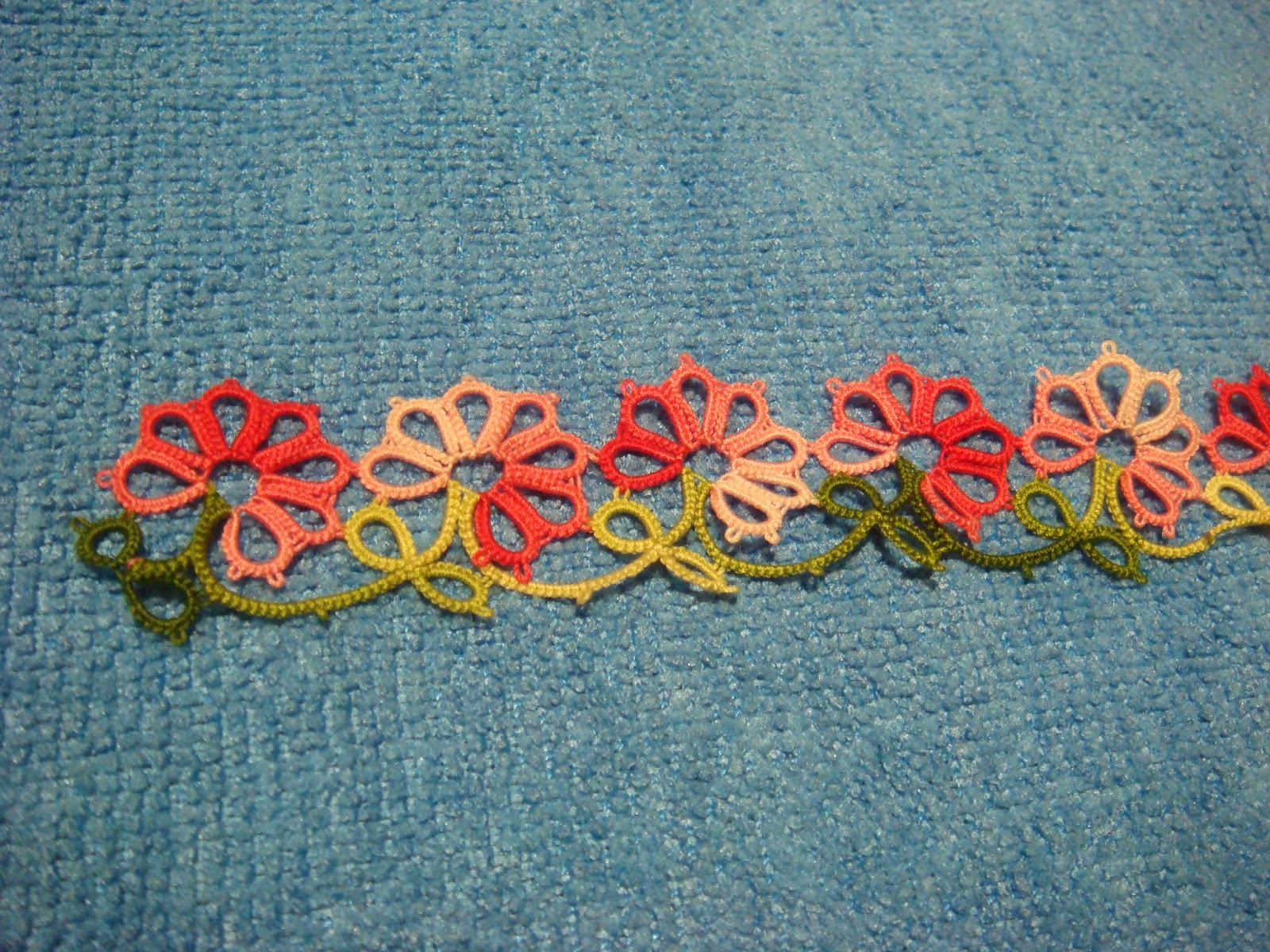 To my surprise the colours worked well, and it looks really pretty. 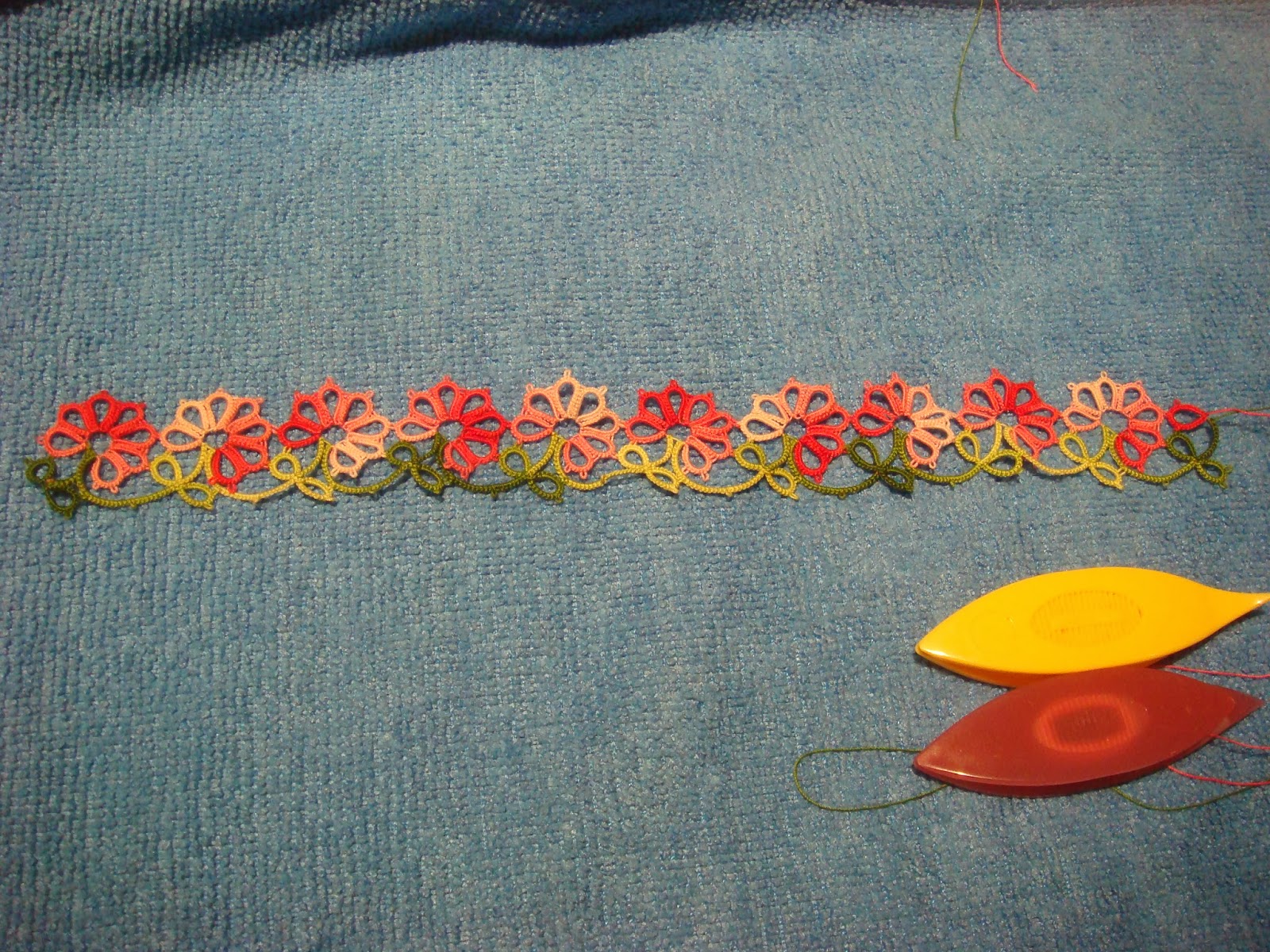 By the time I came home again I had done eleven repeats!

This is me tatting in Le Jardin des Tuileries.
We had a great time, and now I love those colours.
I wish everyone a happy and healthy new year, Bonne Année, Bonne Santé à Tous!
Posted by Katherine at 9:57 am 6 comments: