I have managed to complete Beatrice after some invaluable help from Sherry, who found a spare length of "Peach Pandeora" thread. Here it is, but I am having trouble with my scanner, and the first scan made a file too big to transfer. 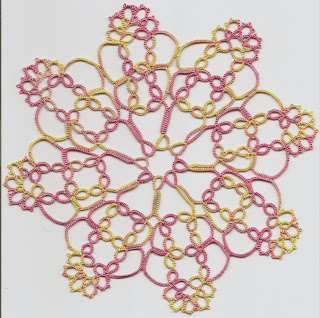 I then wanted to try the silk thread, "Royalty", so I made Judith, again following one I had seen on Diane's page. 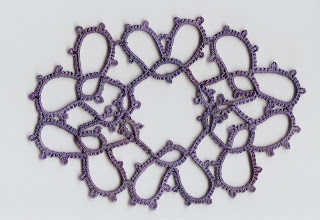 Finally, this motif, from Blomqvist and Persson's book, is not made in Rainbow Bright! The trouble with HDT is that it comes in finite quantities, and so I have become rather careful, not wanting to waste it. This thread is an ordinary machine embroidery thread from Gutermann, and the colours are not so bright, or so well blended. Still I wanted to see how it would look in this classic motif. It is very small, I am guessing the thread to be approx size 100, and when I miscounted it was nearly impossible to undo, so I didn't bother! 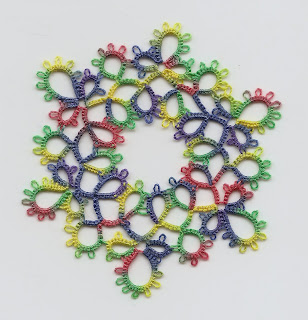 I have after a lot of struggling finished my rainforest dragon. It has a few mistakes, but it is my first piece of figurative work, and I am quite pleased with the way it looks. 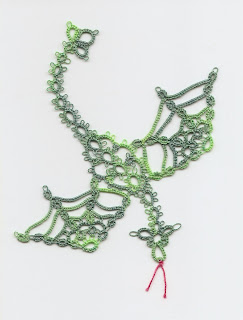 With the left over rainforest thread I made "Aladdin" with rainbow bright for the second row, in the same way as Pamela did. 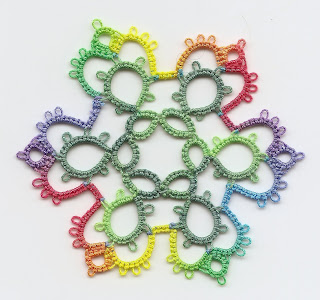 I have tried to use people's names in my blog list...I like real names, and faces, and feel uncomfortable when bloggers are too selective with the information they choose to share...but then I realised that my own name might seem like a pseudonym.
I was christened (yes, once upon a time I was a christian!) Katherine Eirlys David, and as Eirlys is Welsh for Snowdrop, (my father was Welsh) my name was "shortened" to Snowy. In France I am called Katherine or Kate, because Snowy contains too many unfamiliar sounds (and no, Tintin's dog is not called Snowy in France, but Milou, I tried that already!)
Otherwise my friends all call me Snowy, and while I don't think it particularly suits me, (when I was at school a friend asked me if it was because I looked like a rabbit...) I am not sure that I can think of an alternative, so there we go.
My brother's name is Morgan, usually shortened to Morg....one of his friends at university once asked me "Is he called Morgue because he's such a miserable bastard?"
Typical sisterly solidarity, I answered "Yes"!
If anyone doesn't like being "named" for their blog, please contact me, and I'll change it.
Posted by Katherine at 9:55 pm 10 comments: 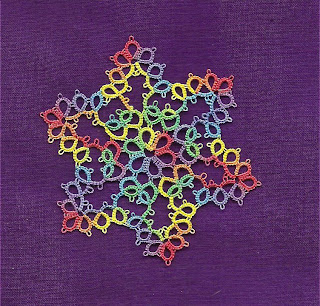 I wanted to try Pamela's challenge of a rainbow snowflake, so I chose a pattern in Jon's book called Pirouette, and had a go. I hate this scanner because the colours are so much brighter in real life, but I hope you get an idea. It was so clever the way the colour repeat just did one spoke of the snowflake each time. I missed a chain in the last spoke, (grrr!) but I am so pleased with this otherwise.

Here on my desk is a skein of Pamela's rainbow thread which arrived today. With it was a sample of Coral Reef, and so now I have a snowflake to make, as well as a dragon. I had better start winding my shuttles! 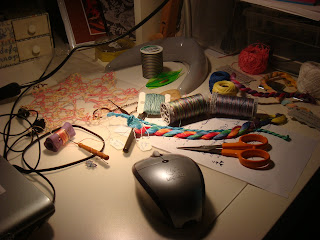 ps, the Gutermann is there as well as various other bits and pieces.

I have been playing with Sherry's "rainforest", with the idea of making one of Anne's dragons, but first I had to learn Single Shuttle Split Rings. That was kind of fiddly.
I decided I had understood enough to start, but then made a mistake on the stitch count, and then the thread snapped when I was pulling the ring tight. I wonder if anyone else has the problem of gaps between the rings, I think I have pulled up close but by the time the ring is pulled tight there is a big space. 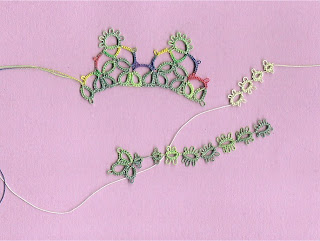 I decided to abandon the dragon for the moment and see how it would look to combine the "rainforest" with a machine embroidery thread, which seems much finer, so I had a go at an edging from Mary Konior's book. I don't think it can be the different sizes that causes it to curve like that, but any way I have finished the shuttle, and I certainly like the colour combination.

You need really to click and enlarge the photo, the rainforest is 80, and the machine thread is Gutermann Sulky, probably about 100.

(By the way I used Tattingchic's method for thread winding, putting a cushion inside the skein, and it worked really well, despite interruptions from phone and dogs!)

Raphael is a boarder this year at a school in Sarlat. As in all French schools there are no lessons on Wednesday afternoons as this is when they are meant to learn about God(s). Very few children actually do so, and if I am not actually working I go and take him out for the afternoon, to worship his favorite god, Manon. We usually buy him the latest book in the Manga series that he's following and then just wander about looking at the shops and then after sitting in a café for a chocolat chaud or an ice cream depending on the weather, we return in time for evening etude. It was in this way I discovered a little shop selling patchwork and embroidery supplies, and I ended up buying some quilting or embroidery threads. They aren't perfect for tatting, a little too fluffy, but the colours are pretty, and here is Mary Konior's Black Magic done in blues. I am not sure if this reminds me more of tempered steel or a forgotten yoghurt discovered under a teenager's bed, but either way it's an interesting mix of pinks and blues. My scanner doesn't do it justice.
Posted by Katherine at 11:08 pm 7 comments:

Beatrice is unlikely to be finished, I have all but run out of thread, and stupidly I didn't buy any more at the time, and now there isn't any. Still, that's ok, because this doily reminds me of another Beatrice, my sad little princess in a chateau. At the time I was caring for her she was aged 38, but an attack of measles when only 18 months had left her severely mentally handicapped and suffering from rather unstable epilepsy. 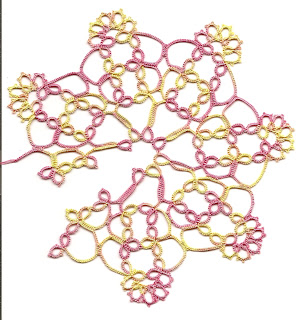 It was my job to wash and dress her each day, and set up her feeding pump, and then in the evening I would put her to bed. She had been cared for by her mother until she had died of cancer and now she was the responsibility of her father. I personally felt that she'd have been happier in an institution, but he wouldn't hear of it, so poor Bea spent day after day alone in the kitchen of the chateau, like some poor imprisoned princess in a fairy tale. I quit that job in 2002, but I often think of her, and how her face would light up as I let myself in, and this doiley seems appropriate in it's incompletion...oh well, that's my excuse anyway. 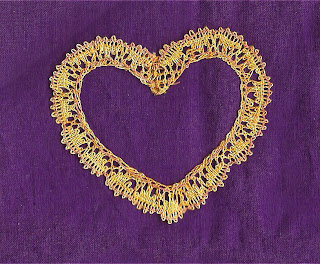 The second heart is off the pillow, and I probably ought to have undone and remade it, because by the end I had a clearer idea of how it should work, but I couldn't face it! I won't wait so long before doing some more bobbin stuff, and so the next trial should be a little better. (should be, lol) 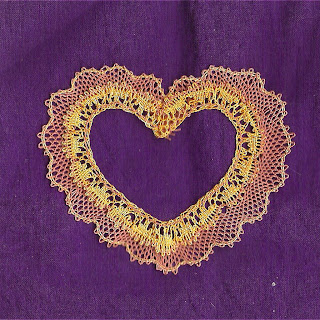 This is what it looks like when you put the two together, and that was the original design...to be used for a greeting card! It would have to be for someone very special for all that work! I don't think I possess that much emotion...I don't really do love, although I do quite like some people...but enough for a card like this, hmmm I think not!
Posted by Katherine at 10:46 pm 10 comments: