Life is as hectic as ever, here, and I wouldn't wish the nightmare of a 15 year old son on anyone! He has a motorbike now, so not only does he drive me mad when he is at home, but he scares me to death when he's out.
On top of that I have agreed to do some tatting lessons in a friends shop...in both English and French. I need to put together some kits, as she doesn't actually sell shuttles, so I have bought some bits and pieces from Roseground,( thank you Pat for the speedy and efficient service. :))
I chose Clover shuttles as they are my favourites, but I have gone with Lizbeth size 20 threads as they are so popular with tatters in general. They look good, I have five different colours, three solids and two variegated. I intend giving two contrasting colours in each kit...and am open to suggestions from anyone who has already taught tatting as to how to begin. I was thinking a chain, first, to get the flip...then picots, and then a ring? 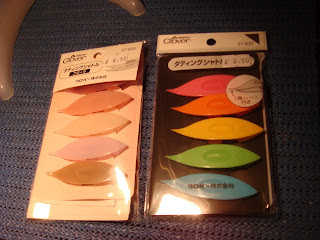 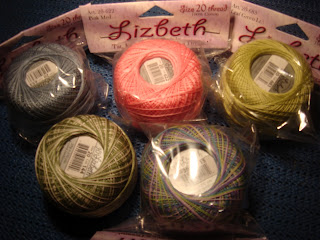 I have also bought a new tatting book, La Frivolité aux Navettes. It has only just been published, so I expect that I am the first to review it?
This is a glossy work with lots of photos, it has a good section on the history of tatting from it's roots in knotting right through to modern advances. 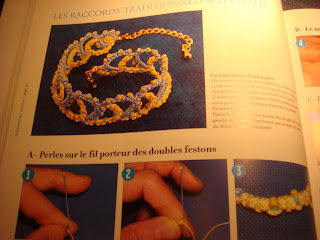 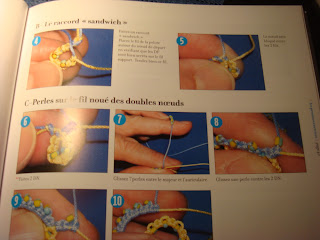 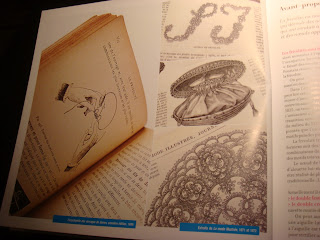 It goes on to work through all the variations, of no flip tatting, right side and wrong side, and all sorts of possibilities. I find it quite hard to follow, despite all the good quality photos, however I think it is a book which will help me to improve my technique. It suggests it is aimed at beginners...me, I think you would be somewhat at a loss if this were your first book, as a would-be tatter. On the whole I would give four out of five stars.
It has encouraged me to try a different technique, a spiral with Josephine knots, which I tried here. 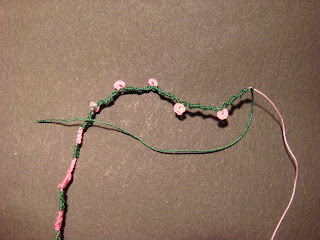 Not a brilliant photo, but nonetheless it could be a pretty bracelet in thicker thread.
I am working away on the three ring square in Raspberry sorbet, and I promise to show you at least two joined together next post...
Posted by Katherine at 9:45 pm 2 comments: 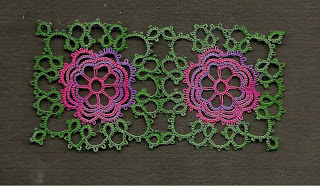 I have been making squares with Tatskool's threads. This is Sharon's rose square, that I have admired for a long time. I have to decide now whether this will be a bookmark or a larger square. I am thinking probably a larger square. The scan doesn't do any justice to the colours which glow in real light. Berry burst, for the centre and nightmare thread from Venus, which makes "bigoudis" every time you try to close a ring, but happens to be the right shade of green. 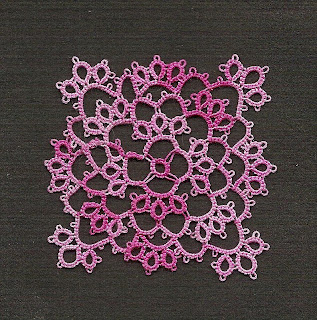 This one is three ring square, also from Sharon's Marvellous Motifs, done in Raspberry sorbet. The split rings are a bit naff, but I am assuming that I will improve with practise. I think this will look a lot more exciting when it is made up with repeats. 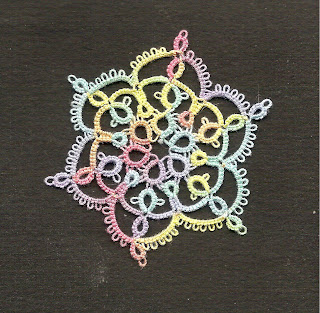 I am showing a snowflake from last time, this time with the ends sewn in. This is Rainbow Light thread and I can't find Jon's book to give you the name of the pattern, sorry!
Posted by Katherine at 10:30 am 4 comments: 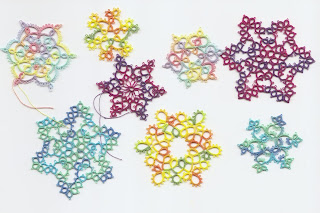 Here are some snowflakes that I made from Tatskool's beautiful threads, and mostly they are Jon's patterns. I kept making mistakes so often...and I wanted to cry, wasting such lovely thread, however I decided to share what I had made, because I am not sure that it shows all that much.
Posted by Katherine at 10:53 pm 7 comments: