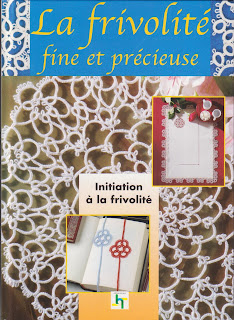 I bought this book a week ago, via Amazon.fr and I have to say I can't really recommend it. It suggests it's a book for beginners, and indeed it has five pages of instructions, but I couldn't really say if they were easy to follow, being as I know that bit. Then there are some patterns, which are in general very pretty, but then we hit the problems. On some patterns there isn't even a stitch count on the diagram, let alone a suggestion of where to start or what order you should tat. There isn't much on whether you should use one or two shuttles or any other techniques. 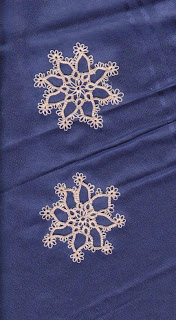 Here are a couple of stars from a very pretty doiley pattern called Rose
one done with me discovering after I had begun that I should have wound two shuttles in CTM and managing by using the SLT. Then, serendipity, as Jon showed how to do self-closing mock rings, and so I tried that as an alternative method. I think it was successful and am not even sure now which is which.
The bootees are coming along slowly, one is finished and one is on the third row, but I am running out of thread! Who else struggles to make their thread last, like driving home really fast before the petrol runs out!
Also, does anyone have time to explain how to get an E-Tatters banner on this page? I see others have done it, but have no idea where to start!
Posted by Katherine at 8:39 pm 5 comments:

I have put a picture of progress on my black baby bootee on my other blog
There are quite a lot of other photos and the tatting is somewhere in the middle, so it's not for those in a hurry!
Posted by Katherine at 7:02 am 1 comment:

I haven't been posting, because it's difficult to scan on my computer and I have to use the one belonging to the man I live with. He doesn't mind that much, but he often seems to be using it himself.
Anyway, here are a few bits from the previous month.
First, a lilac square from Mary Konior's book. 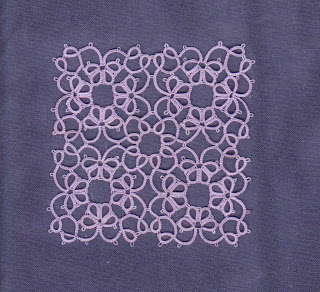 A little brown square from A Tatter's Workbook. 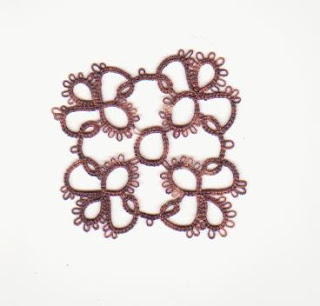 This was the beginning of a square from Iris' book, but I didn't like the colour of the thread...sort of bilious, I felt, so I gave up. 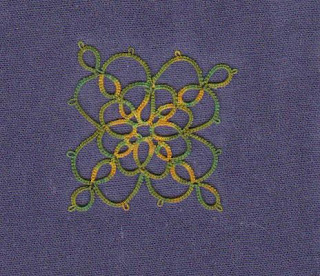 And then I discovered that the man's eldest son and his girlfriend are expecting a baby, so I decided to have a go at the bootees as shown by Pamela...not knowing what sex the offspring might be I chose black, well, it goes with everything doesn't it? Mmm, I have been getting a lot of "Black is not really suitable for babies" feedback, but as I am bound to make too many mistakes I am carrying on regardless, this will just be a prototype. 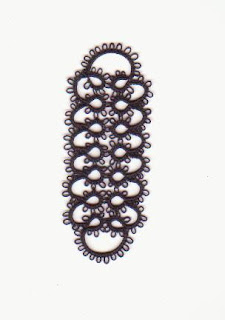