I often read about people's tatting corner, and Tatting Tea Tuesday, and feel quite sad that I can't share in the fun. I tat where I can, and Tuesday is always a working day as the new arrivals come that day. Still, after lunch today I took my cup of tea into the garden with my shuttles and settled in a patch of sunshine. 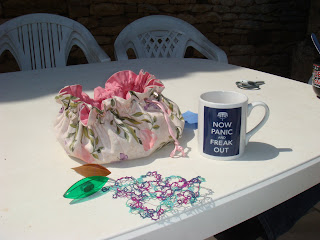 Raphael was with me, and he took a couple of pictures of me at work.... and I look like an old lady! When did that happen, I still feel young, but I look positively ancient. 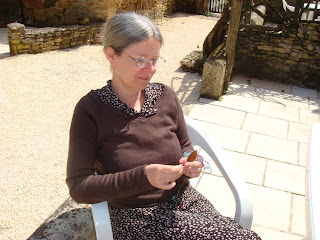 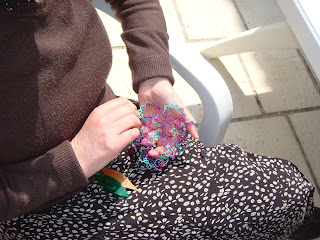 Collar, mark 2, and a doily

I had a quiet day at work on Monday and so I finally finished mark 2 of the collar, and sewed it on to an old cardigan. I have never actually worn my own work before and feel a bit embarrassed about it. Still, I am showing you guys, and if it looks too awful I can always remove it! 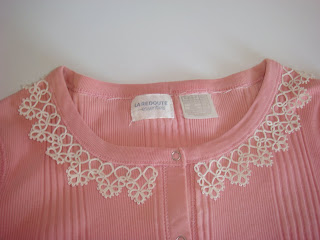 Then I started a doily in "Stardate". This doily is called "Libra" and is from the first book by Pascal Provost. 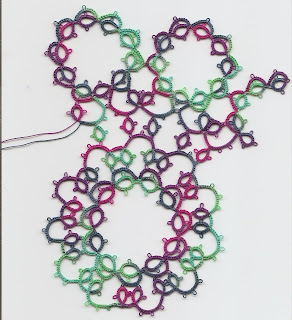 Actually the French for the astrological sign is 'Balance' so it doesn't really have much relevance. All this reminds me of the time when Raphael, aged about 8, appeared one morning and said;
"So, David, what are you?"
"What am I what?"
"Well, like Taurus, Herpes, Pisces...you know."
"Er, Herpes isn't a sign..."
"What is it then?"
"Generally it's a sexually transmitted disease..."

Actually Raph was born at the end of December, which makes him a Capricorn, and pretty difficult to live with. As we keep reminding him, Jesus was a Capricorn and they ended up crucifying him!
Of course, I'm only teasing, I don't believe in Astrology...well, I'm an Aquarius and we aren't quite as gullible as the other signs. :P
Posted by Katherine at 9:51 pm 9 comments: