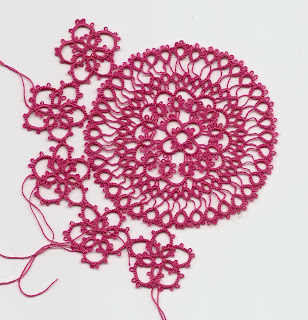 I haven't been doing much tatting,( my day to day life  has continued on my other blog) but I do occasionally add a motif to my "Yes-u-can" doily. No ends have been sewn in though for a while! 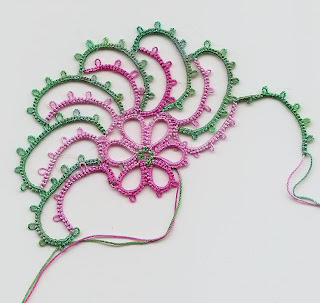 This is an experiment from my latest book on tatting, where you flip one row and don't the next...I think it looks interesting but I ran out of thread. 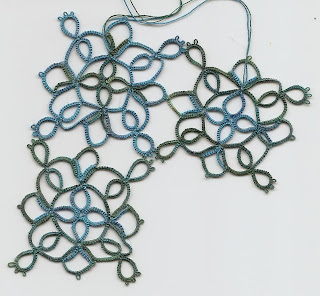 I began a square from Iris's book, but haven't finished it yet. :( Much unfinished work at the moment isn't there? 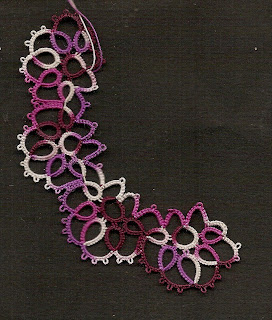 This was an experiment to try my new way of tatting, you see I learnt from a book in 1973, and never saw anyone tat until recently. Thanks to the internet I realised that my method was slow and clumsy compared to what other tatters did...thank you Diane, Tattyhead, and Yarnplayer for enabling me to see how I could improve. (Amongst others, who I didn't note down.)
So slowly I picked up that graceful movement and sped up. This motif was done after looking at the pansy motif, it's on the same page of the Saunders Tatting book. The thread was a free sample from Roseground, Elizabeth 40, and I don't like the colour at all, however the thread itself tats beautifully and I will be buying some next order I put in...but not this colour!

The reason I had put in an order was because a friend asked me to teach tatting in her shop. She was able to find Clover shuttles but not the Elizabeth threads. I thought it might be hard to learn on thread that is too fine so I ordered a couple of colours to help potential students get started. This was one, Springtime, I think it's really pretty. 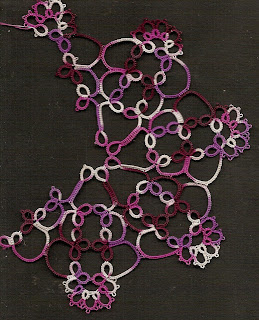 Then I had sudden urge to try an Iris doily with the hideous thread, so I wound my shuttle and started. I left it on the table overnight, and my naughty puppy, and my naughty kittens played with the contents of my bag. :( 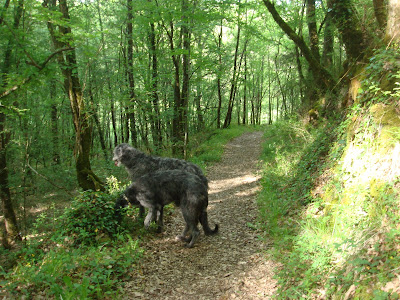 My beautiful dragon shuttle from Shuttle Shop was broken, and I had to rewind another.
Posted by Katherine at 7:16 pm 3 comments: