I have been wondering whether to buy this book for ages. On one hand it has a very good review by Gina Buchanan, but on the other I wasn't that keen on the cover picture. Well, never judge a book by it's cover, because this is a wonderful book, with patterns and tips for all levels of tatters. 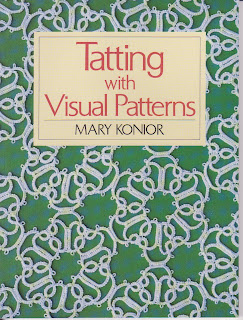 This picture shows a shuttle only edging called "curds and whey" which is so simple but really pretty, and also the flower motif from the front cover. The diagrammes are really well explained and there's a good variety, edgings, motifs, collars and doillies.
I have taken on an Open University course which will be taking up a lot of my time, none-the-less I feel that this book will keep me inspired to do a little bit of tatting whatever the demands on my schedule. 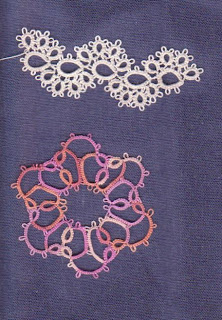 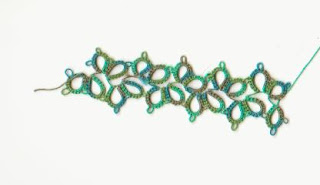 Definitely gets five stars from me! (It was no longer available from Amazon, but if anyone is interested I found it at Handy Hands.) 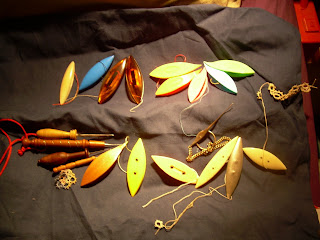 I enjoyed reading Sharon's post about shuttles and so I thought I would show you mine.
I learnt back in 1974 with an Aero shuttle, but I didn't like it. I didn't like the noise the bobbin made as it was unwound and then it was fiddly when it needed to be rewound for the chain. My next shuttle was a Milward shuttle which I think must be at my ex-husband's house as I haven't been able to find it. I liked that much better...but as I have said, tatting was laid aside while I trained as a nurse, had children, moved to France etc. Despite this I bought three shuttles in a little case from an antique market in Bath in the early eighties. I was pleased because the seller didn't know what they were for, so they were pretty cheap. They are in the bottom right of the picture, and one is metal, but the other two are made of bone or ivory. I have never used them, though I did use the hook that came with them. When I became interested again I found a packet of two plastic shuttles very cheap on a market stall in Sarlat. They would be better if I took the time to sand them down as they are very poorly finished, and have seams that catch on the thread. (bottom middle) I then decided to splash out on the pack from Clover, via internet, I think from Snowgoose, when I was buying materials for bobbin lace, and have never regretted it. I find them easy to wind, easy to use and I love the cheerful colours. The little pick end means I can tat with impunity on the most paranoid of airlines, and so I would give 5/5 to these ones.
The tortoiseshell plastic and blue plastic ones are made by Innox. The tortoiseshell are nice to work with, but a pain to wind. The blue is ok, but I bought it in Guerande with my daughter so I keep it for that.
The bone shuttle top left is for celtic tatting, it's from Handy Hands, and the other shuttle bottom right is from David Reed Smith. I like this one, which is reasonable to wind and holds lots of thread, but I should have ordered a second one as I like to use matching shuttles. I made sure not to make the same mistake with the Shuttle Shop!
You should click on the picture to see the shuttles clearly, and the hooks are from David Reed Smith, Lyn Morton, and the third was made by my partner from an old bobbin and a crochet hook.
Posted by Katherine at 5:51 pm 4 comments: